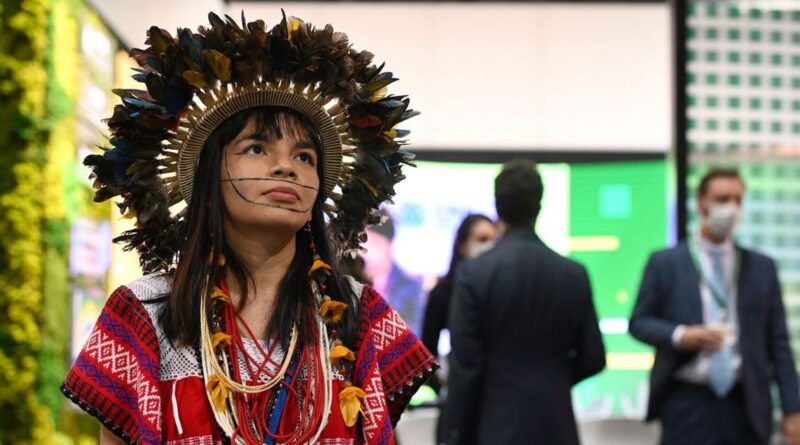 On the final day of the United Nations’ COP26 climate summit in Glasgow, Scotland, delegates who identify as part of the climate justice movement staged a massive walkout. At a prearranged moment, people from nongovernmental organizations and other civil society groups left the plenary hall and joined protesters on the far side of the eight-foot high fences surrounding the summit, chanting, “The people united will never be defeated.”

Here, from a makeshift stage amid the wind and rain, speakers (delegates and nondelegates alike) addressed the crowds of people, many of whom had chosen to come and listen to them over staying inside the warm halls of the climate talks. Almost all those who stepped up to the mic were young women.

“My given name is Xwisxwacca, and I come from a very long line of powerful women,” said an activist from the tribal regions of Coast Salish and Nuu-chah-nulth in Canada. “So many people in my life have shown me what it means to say that truth and not be afraid.”

Another, who identified herself only as 15-year-old Safiya from Chad, spoke about the power of African women when they come together, but also of her frustration at the lack of inclusivity within the summit. “I’m here with my sister,” she said. “I’ve been screaming and shouting for the past two weeks. No one is listening.”

That was a common theme at the UN conference, a 2-week-long summit that wrapped up over the weekend. Young women from across the world came to COP26 with stories of how their homelands are being destroyed and how different solutions and policy ideas could make things better. But even when they were given the mic to speak within the summit walls, there was no guarantee they’d be listened to.

A UN report published last month showed that even though men made up just over half of government delegates at climate talks, they spoke for 74% of the time, making their voices vastly overrepresented in negotiations. Climate justice advocate and former president of Ireland Mary Robinson dismissed the summit this week as “too male, too pale, too stale.”

Outside the summit, it was a different matter. The systemic issues that maintain the status quo with COP didn’t apply here, meaning that at fringe events and rallies, it was rare to see a male speaker, and even rarer to see a white man on stage. This wasn’t just a coincidence. The climate justice movement is intersectional to its core and actively elevates the voices of those who are most affected by climate change but whose voices are least heard. Not only does the movement listen to these women (often young, Black and Indigenous women), but it points to them as its leaders.

Txai Surui, a 24-year-old Indigenous activist from Rondônia in Brazil, was one of several young women called on to speak to presidents and prime ministers at the opening of the World Leaders Summit. But time at the podium isn’t the same as making key decisions about finance and policy — and Surui knows it.

“It was great to be able to have a speech during the opening, but I don’t want to just be here making speeches,” she said in an interview. “I want to be able to be part of the negotiations and decisions, and this is not happening here.”

It’s important that Indigenous people are the protagonists of their own stories, Takumã Kuikuro, a filmmaker from Amazonian Brazil, said in an interview. It meant a lot to him to see Surui address the world leaders. “Her voice and the voice of Indigenous women is really being heard,” he said.

At the heart of Surui’s message is that Indigenous people, especially people from the Amazon, need to be right at the center of discussions about the climate crisis, not just on the periphery. Other countries have recognized this, she said, but that doesn’t mean they’re doing anything to change.

“We are not being invited to participate in these decisions,” said Surui. “It must change because we are on the front line of this fight.”

Young women were at risk of being tokenized in a number of different ways at COP. Throughout the summit, leaders were accused of youth-washing and gender-washing — using young people and women to make themselves look as though they’re listening. This is exactly why Swedish activist Greta Thunberg blasted the summit as a PR event at a rally last week.

According to Tetet Nera-Lauron, senior climate justice lead at ActionAid, roping in women for a TV moment distracts from the structural issues at the summit and in the climate crisis more widely. “It doesn’t matter if you have so many women come up the stage if you don’t go to the roots of why women are facing the harshest impacts [of climate change],” she said at a press conference Thursday.

Women on the front lines

Women’s climate leadership is born out of lived experience. Along with trans and nonbinary people, they’re disproportionately hurt by the climate crisis versus men.

Climate change is directly responsible for eroding human rights, affecting the right to food and to children’s education and increasing the risk of trafficking and slavery, Teresa Anderson, climate policy coordinator for ActionAid, said during a press conference Friday.

“Women and girls are particularly vulnerable to all of these impacts,” Anderson said. “If you lose your home in a flood, or your crops in a drought, or your farmland to rising sea levels, or your community infrastructure in a cyclone, there is simply no money available to help you to recover, or to rebuild, or to avoid falling into a deep poverty spiral.”

During a separate press conference held at COP26 by the Women and Gender Constituency (one of the nine official stakeholder groups of the United Nations Framework Convention on Climate Change), one chair was left open for the missing voices at the summit. “We are here to represent them, and also to talk about the different demands and what we see that should be the outcomes,” said Gina Cortés Valderrama, project manager at ecofeminist network WECF International.

This is an issue that Rep. Alexandria Ocasio-Cortez raised multiple times during her visit to the summit last week. The congresswoman from the Bronx talked about how Indigenous women, both within and outside the US, go missing or are murdered close to the sites of fossil fuel extraction.

For Ayisha Siddiqa, a 22-year-old climate activist from Pakistan who now lives in New York, knowing that women have died as a result of the fossil fuel extraction and wars that have taken part over oil is inextricably linked to her activism. “It is not a coincidence that the very people who experienced the threat of extinction by the hands of colonizers, by white supremacy, unequivocally understand the pain of the Earth, of the threat of extinction,” she said over email. “We are guardians of the Earth, because we are the Earth, in that the Earth disproportionality holds our dead.”

In spite of this, women don’t want to be seen as victims. Mwanahamisi Singano, program manager at Femnet, a rights organization for African women, described how during a pre-COP event, African women and girls said they were tired of being case studies.

“African women and girls have aspiration. They have dreams. They want to live life. They want to thrive,” she said at the Women and Gender Constituency press conference. “More importantly, they want to be free from all forms of oppression. They want to be rightly recognized as the custodians of knowledge, ability and skills.”

This desire for agency can also be seen among the young women at COP who see the solution to the problems faced by women around the world as existing within themselves and not the negotiators within the summit halls.

Time and again throughout COP26, it was apparent how impactful women’s leadership is. Even in the first few days during the World Leaders Summit, the words that resonated the loudest and got everyone talking — above those of President Joe Biden and UK Prime Minister Boris Johnson — were those of Mia Mottley, the prime minister of Barbados.

“Are we really going to leave Scotland without the resolve and the ambition that is sorely needed to save lives and to save our planet?” she told a room, primarily filled with men. “How many more voices and how many more pictures of people must we see on these screens without being able to move? Or are we so blinded and hardened that we can no longer appreciate the cries of humanity?”

Another powerful voice that has rung both inside and outside the summit walls is that of Vanessa Nakate, a 24-year-old Ugandan activist. At a Fridays for Future climate rally held on the first Friday of the summit, she gave a speech painting a picture of a world in which climate justice had prevailed.

Along with Thunberg, Malala Yousafzai and a handful of other young female activists from around the world, Nakate was interviewed by actor Emma Watson at a panel at the NYT Climate Hub. In an Instagram post after the event, Watson said: “I felt a bit like I was in the presence of the female Avengers assembling before The Battle of Earth.”

Nakate has spoken previously in interviews about how she’s always been shy. In spite of the power of her words, she is gentle in her delivery. Much of this generation of activists are as sensitive as they are determined, as soft as they are loud. Like the Avengers, they too can’t do it alone. Together, they form a community that Lasota says is “a source of incredible support.”

“It’s kind of an opportunity for me to breathe a bit and renew my energy,” she said. “I feel like I’m not alone in this, that there’s so much collective power that we have, and eventually things will change, eventually our leadership will resonate.”

Siddiqa described how she feels like her fellow activists are siblings given the same task and sent to different lands all over the world to do the work of climate justice. Working in harmony and with gentleness to combat the climate crisis are not signs of weakness or nomadic simplicity, she added. “These are the traits of our mother,” she said. “These are the things that have kept us alive.”

At the demonstration outside the summit, protesters joined hands to create a clearing for Lasota and the young women of the climate justice movement, holding space for them to come together to jump and dance and hug. It was a rare moment of joy in the midst of the otherwise somber, stressful and often sad climate summit.

For some, it was also a moment of reprieve between speaking gigs in which they once again begged leaders to hear their pleas to phase out fossil fuels, to provide much-needed, long-promised finance to their countries and to stop letting them down. 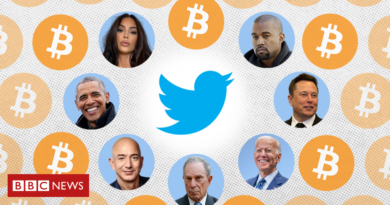 2016 Jeep Wrangler Trailcat concept had the heart of a Hellcat 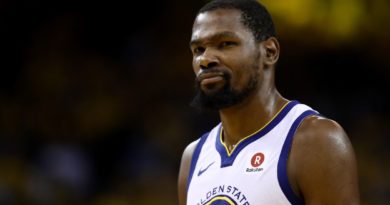