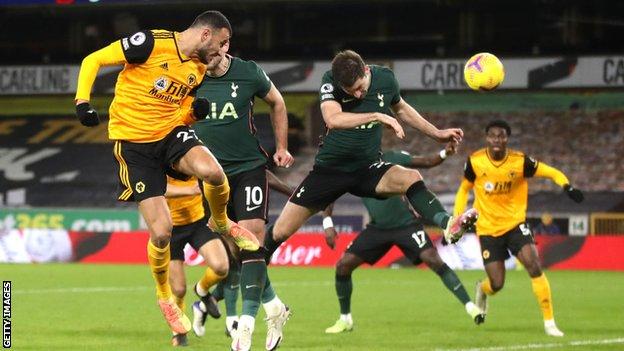 
Romain Saiss produced a header that watching Wolves team-mate Raul Jimenez would have been proud of to deny Tottenham victory at Molineux, and a place in the top-four.

But, just as it appeared their dominance would earn no reward in the continued absence of Jimenez – attending a game for the first time since fracturing his skull at Arsenal at the end of November – Wolves struck an equaliser.

Morocco defender Saiss met Pedro Neto’s corner at the near post with a superb glancing header to steer the ball past Hugo Lloris.

It was the least Wolves deserved after their efforts at shackling Harry Kane and Son Heung-min.

Spurs’ star duo rarely got a clean sight of goal and, although Sergio Reguilon might have made the game safe for Tottenham, they paid the price for retreating too far into their shell.

After the game, Mourinho said it was never his intention to defend the slender lead and instead questioned his players for not showing more ambition to go for more goals.

Mourinho added on Sky Sports: “I give some credit to Wolves, of course, because by losing, they put some pressure on us, pressure that we coped quite well with, controlling the game very, very well.

“But we didn’t have that ambition, that desire to go for more.”

Tottenham, who would have gone third with the win, move to fifth, splitting the two Manchester clubs, who both have a match in hand.

Wolves are 11th and might have won it in the final minute of injury-time when Fabio Silva headed straight at Lloris.

While Jimenez’s presence was poignant for the hosts, that defenders Jonny Otto and Willy Boly were with him in the same executive box as they recover from injury was significant.

With Matt Doherty playing against his old club for Spurs and Diogo Jota now at Liverpool, half of what would be considered as Nuno Espirito Santo’s preferred team from the past two seasons was not available to him.

As Nuno has implemented a new style of play as well, there was an element of transition about this season even without the injury to Jimenez.

Since the Mexican striker’s injury, Wolves have won one of five matches.

Wolves were excellent in possession but their attacks petered out in the final third. Daniel Podence brought a decent save out of Lloris before the break and both Silva and Neto threatened the Tottenham goal.

Wolves are looking for a striker but a loan inquiry for Real Madrid’s Luka Jovic looks destined to fail.

In the meantime, they are living off scraps, such as the second-half penalty claim for a foul on Silva by Eric Dier that was rejected by VAR.

Some Wolves fans are getting impatient, which is harsh in the extreme, especially when they retain the character and determination that Nuno has spent so long building and which earned them a point when all appeared lost.

“I think we performed really well, I think we played a very good game. The result is the consequence,” Nuno said.

“We conceded very early in the game, but the team reacted and we played well, very intense, very aggressive against a very dangerous side, very good, very talented. But we played well. I’m happy.”

When Tottenham played Burnley last March in the game immediately before lockdown, Ndombele was hauled off at half-time, with Mourinho complaining afterwards the midfielder had failed to follow instructions.

The halt to the season created a three-month void which was filled by endless chatter about the France midfielder’s future.

That faith has been rewarded this term. For, while Kane and Son have attracted all the attention, Ndombele has started delivering the performances his price-tag demands.

Rui Patricio did not cover himself in glory for Ndombele’s goal – but the strike means the former Lyon man has already matched the total from his debut campaign. Amazingly, it was only the fourth Spurs goal this season that has not involved Kane or Son.

The charge out of defence that followed not long afterwards was majestic, taking him from one penalty area to the other, the only disappointment coming through Reguilon’s failure to finish as he drove his shot straight at Patricio in the Wolves goal.

Spanish full-back Reguilon had already glanced a header wider by that point but after that, Ndombele’s best work was through holding his position and not allowing the Wolves attack to come through.

Mind you, when he brought the midfielder’s evening to an end 20 minutes from time, Mourinho jumped out of the dugout to deliver instructions and completely ignored the man he had brought off, providing the era of tough love is not at an end.

As it turned out, the job was not complete.

Wolves have a quick turnaround to their next game and visit Old Trafford to face Manchester United on Tuesday, 29 December (20:00 GMT). Tottenham have a bit longer to prepare for their home London derby with Fulham on Wednesday, 30 December (18:00 GMT). 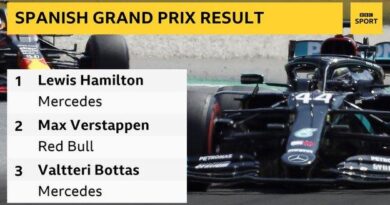