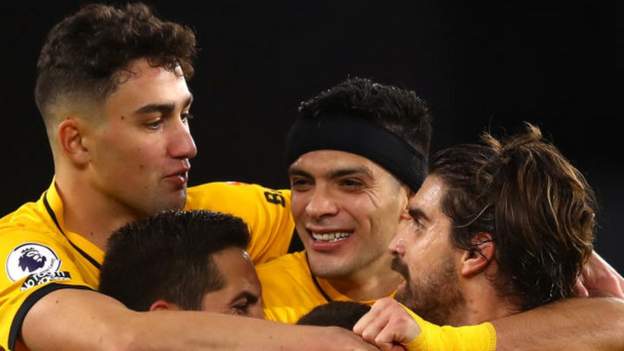 Raul Jimenez says he “knew from the first moment” he would recover from a “difficult part of his life” after scoring the only goal in Wolves’ win over West Ham on Saturday.

Striker Jimenez, who spent eight months on the sidelines after fracturing his skull in a league game at Arsenal last season, swept Daniel Podence’s cut-back into the corner from the edge of the box to lift Bruno Lage’s side up to sixth in the table – and end the Hammers’ four-game winning run in the Premier League.

Wolves dominated proceedings after a slow start and created numerous opportunities to take a first-half lead – the best of which fell to Jimenez, who dragged a tame effort wide with only West Ham goalkeeper Lukasz Fabianski to beat.

Kurt Zouma had the ball in the net for the Hammers, but the centre-back’s header was disallowed for a foul on Romain Saiss.

Michail Antonio and Jarrod Bowen blazed over in the second half as the visitors sought a route back into the game, but David Moyes will be bitterly disappointed with his team’s below-par performance.

Max Kilman should have ended West Ham’s hopes of salvaging a point when he fired Rayan Ait-Nouri’s free-kick delivery over the crossbar with three minutes remaining.

“We knew we were beaten in the last match [at Crystal Palace], so this was a good opportunity today to bounce back,” added Jimenez.

“We’re fighting as a team and as a family. This is how we have to keep going.”

Wolves too strong for toothless Hammers

Their recent 2-0 defeat by Crystal Palace notwithstanding, Wolves have been improving steadily under Lage since losing their opening three league games of the campaign.

Indeed, only leaders Chelsea and in-form Arsenal have picked up more points than Lage’s team since they were beaten by Manchester United at Molineux at the end of August.

They were content to soak up the Hammers’ pressure early on but grew into the game as the first half went on. Ruben Neves tested Fabianski from distance before Nelson Semedo shot wide of the near post from Ait-Nouri’s cross.

Jimenez should have put the hosts into the lead moments later after latching onto an exquisite Neves pass, but failed to hit the target after attempting to dink the ball over the onrushing Fabianski.

The pattern of play continued early in the second half, with the lively Podence forcing the Hammers’ goalkeeper into two terrific saves – one from a low shot towards the far corner and another from a looping strike from the edge of the penalty area.

Jimenez eventually got the goal the hosts’ enterprising play deserved as Wolves recorded three successive top-flight victories for the first time since 1980.

It all started so well for West Ham, who were crisp in possession in the early stages and tested Jose Sa through Jarrod Bowen and Tomas Soucek.

They faded as the game wore on, though, managing just one further shot on target – from captain Declan Rice in the second half.

A fifth successive victory would have equalled the club’s top-flight record, but it was not to be.