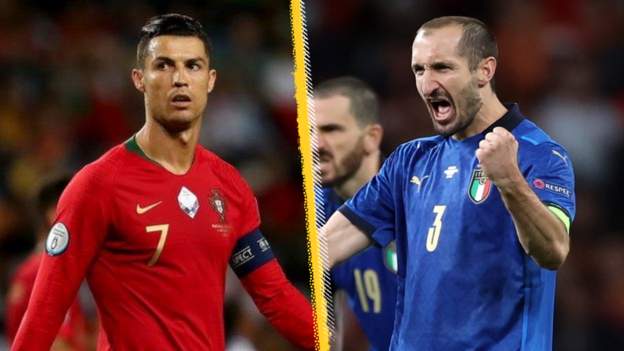 Scotland had Hampden rocking on Monday evening, but next week the country will stop and hold its breath as the World Cup play-off draw takes place.

The thrilling 2-0 victory over Denmark secured a home semi-final and, as a seeded team, they will also avoid big names like Portugal and Italy.

Steve Clarke’s men will learn their fate at 16:00 GMT on Friday 26 November, but amid the euphoria, there still lies 180 minutes – and possibly more shoot-out drama – between Scotland and the greatest show on earth in Qatar.

Who can Scotland face? Who will Clarke be hoping for in the draw? Who will be giving him nightmares? Here’s what we know so far…

It’s a peculiar, yet bewitching, sight looking at the table of best-placed runners-up. There is little Scotland sandwiched between Euro 2016 winners Portugal and Euro 2020 champions Italy, having just put away a Denmark side who were chasing a 100% record in the qualifiers.

Those two giants of world football will not be coming to Hampden for the play-off semi-final. Neither will Russia, who are also guaranteed to be seeded.

However, that does not mean Scotland will not have to take on any of them on the road to Qatar and it will be down to the draw whether they are home or away in the final – should Scotland make it that far.

Another big name to enter the fray?

It already feels unfair that Italy and Portugal are possible opponents for Scotland. But the Netherlands could also yet be in there too.

Louis van Gaal’s side are currently top of Group G but could still finish as low as third and miss out altogether, should they lose at home to Norway while Turkey win away to Montenegro on Tuesday.

A draw at home to Norway should be enough for the Dutch to top their group and leave them out of Scotland’s way.

Sweden can do nothing but watch from afar as Tuesday’s games take place. They are currently seeded and should stay there as only a combination of Wales beating Belgium and Turkey hammering Montenegro by at least five goals would deny them.

Poland, who finished second in Group I behind England, have a more vulnerable place among the seeds. Wales just need a draw in Cardiff to leapfrog them. Even if the Welsh lose, should Czech Republic beat Estonia by six goals, they also would go above the Poles.

Finland too still have a chance of being seeded but not only do they need other results to go for them, they need to beat World Cup holders France by six goals. Just remember you heard it here first… 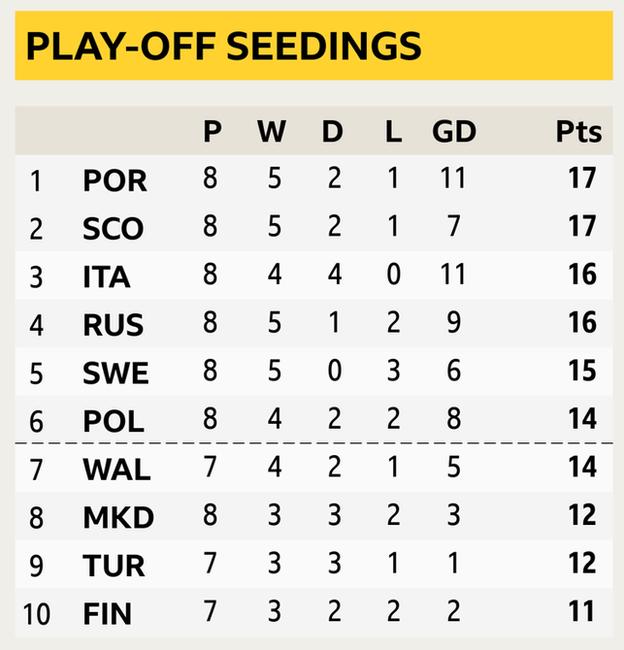 So who can Scotland face in the semi-final?

The two teams qualifying from the Nations League will join the four unseeded nations as potential opponents for the Scots.

While Wales and Czech Republic are battling it out for second spot in Group E, whoever finishes third has a lifeline from the Nations League. Likewise Austria, who Scotland took four points from six from in the group stage, also qualify from that route, with no word that they and Scotland will be kept apart – meaning the possibility of facing each other for a third time.

North Macedonia will definitely be unseeded. At one point, they threatened to win Group J after a 2-1 win away to Germany in March but eventually finished nine points behind Hansi Flick’s side.

Finland currently hold second place in Group D, although Ukraine – who have drawn six times and won only once in their group – could leapfrog them with a win away to Bosnia-Herzegovina. Turkey appear favourites to finish second in Group G.

The only thing that is certain is that a full house at Hampden awaits and, after six wins on the trot, perhaps Scotland are one of the sides everyone is hoping to avoid.

For now, all Clarke will talk about will be his side’s chances of winning the semi-final. He will not entertain any talk of a final.

The best-case scenario should Scotland win is to be at home again for the final.

Wales on paper may seem like welcome opponents but they are ranked 19th in the world – 23 places above the Scots.

Trips to Lisbon or Rome come spring will be Tartan Army friendly but likely not present the best chance of qualifying.

However, back in September, when Denmark raced into a 2-0 lead inside 15 minutes against Scotland in Copenhagen, fans would have bitten your hand off to face anyone for the right to go to the World Cup.

And, after penalty shoot-out wins over Israel and Serbia secured a Euro 2020 spot the last time we faced play-offs just over 12 months ago, maybe – just maybe – Scotland have got this qualifying lark sorted.

Covid in Scotland: Concerns over 'surging cases' in Moray