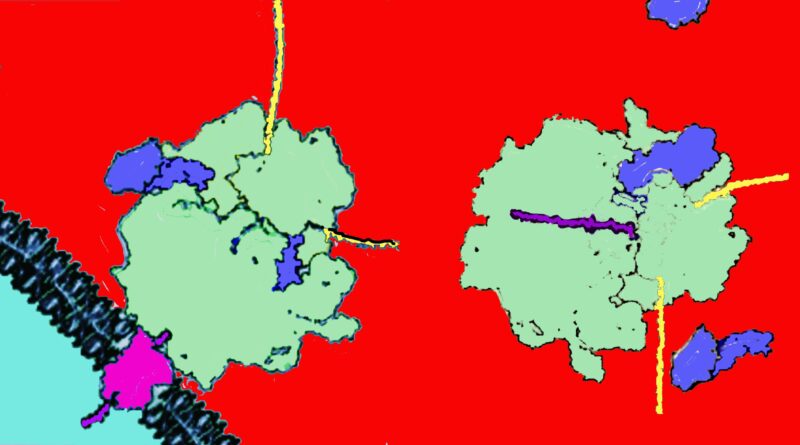 Exploring the mechanisms involved in sleep-dependent memory storage, a team of University of Michigan (U-M) cellular biologists found that RNAs associated with an understudied cell compartment in hippocampal neurons vary greatly between sleeping and sleep-deprived mice after learning.

Sara Aton, Associate Professor in the Department of Molecular, Cellular, and Developmental Biology, and James Delorme, a recent U-M neuroscience graduate student, hypothesized that both a learning event and subsequent sleep (or sleep loss) would impact mRNA translation. Most prior work on the effects of sleep on mRNAs have focused on transcripts in the neuronal cytosol. However, Drs. Aton and Delorme found that after learning, major changes in RNAs are instead present —almost exclusively— on ribosomes associated with neuronal cell membranes. These results have been published in the Proceedings of the National Academy of Sciences, in November 30, 2021.

The team first applied a commonly used biochemical method that homogenizes and centrifuges the hippocampal tissue, to separate the cytosol (the aqueous component of the cytoplasm of acell within which smaller organelles and particles are suspended) from other cellular components that are usually considered “debris” (endoplasmic reticulum, golgi apparatus, cell membrane, etc.). In this study, the authors found that RNA associated with ribosomes in the cytosol varied depending on whether the animals slept or not, confirming prior transcriptomic studies. However, cytosolic ribosomes showed almost no RNA changes depending on prior learning.

“If we had just stopped there, we wouldn’t have found anything that was novel or insightful. We strongly felt that we had to rethink our methodology,” explained Aton. Since it is well known that the endoplasmic reticulum is covered with ribosomes, the machinery that converts RNAs into proteins, Delorme and Aton decided to sequence the RNAs in the other parts of the cell, the “debris,” outside of the cytosol. It is in the less-well-studied membrane-containing cell fraction that they found that many transcripts were affected as a function of prior learning. These modified transcripts also differed significantly whether the animals had been allowed to sleep following the learning—allowing a new memory to be stored—or if they had been sleep-deprived. These unexpected results open the door to many more investigations.

“By looking in those other areas of the cell, we now have the capacity to generate many new hypotheses about what happens at the molecular level when memories are consolidated, and when consolidation is interrupted due to sleep deprivation,” said Aton.

For example, in the animals that slept following learning, Aton and Delorme observed an increase in the abundance of transcripts that encode components of protein synthesis machinery in the membrane fraction of hippocampal neurons. One hypothesis would be to test whether there is indeed an increase in protein production by membrane-associated ribosomes after post-learning sleep.

In addition to mRNAs, the authors also found that learning led to changes in long non-coding RNAs’ association with neuronal membrane-bound ribosomes. These could play a role in regulating the translation of other transcripts, which should be investigated. “The cells have developed very elegant mechanisms to fine tune the process from transcription to translation, and long non-coding RNAs could be one of them in this part of the brain,” said Aton.

She further explained by comparing neurons to a large warehouse, with complex logistics that are needed to respond quickly to needs for new proteins in distant cell processes, requiring preparedness and distribution adaptation processes. “Neurons have to deliver the ‘package’ within a reasonable time frame, when it’s needed, no matter how far away that location is. Neurons have evolved to do this, and it is a huge biological question to investigate. It is important to understand how this biology works because—in addition to storing new memories—it impacts regeneration, degeneration, and neurological diseases,” concluded Aton.

This is the second PNAS publication from the Delorme-Aton team’s research. In their first article, the team found, in sleep-deprived mice, an inhibitory gating mechanism that could disrupt hippocampal activity and memory consolidation. In contrast, post-learning sleep suppressed the activity of inhibitory interneurons, increased activity among surrounding hippocampal neurons, and improved memory storage.

How sleep loss sabotages new memory storage in the hippocampus

Provided by
University of Michigan