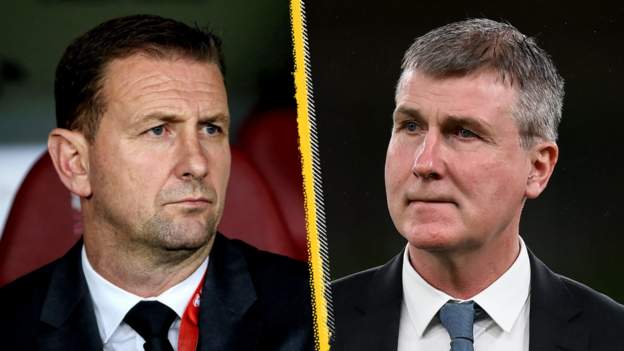 Northern Ireland will take on Greece, Kosovo and either Cyprus or Estonia in their Uefa Nations League group.

Facing Greece will bring back memories of Northern Ireland’s successful Euro 2016 qualifiers when Michael O’Neill’s side won in Athens and Belfast.

At 55th spot, Greece are one place behind Northern Ireland in the Fifa rankings with Kosovo in 111th position.

Scotland will be among the Republic of Ireland’s opponents with Ukraine and Armenia also in Group B1.

The 105th-ranked Cypriots have to face 107th-rated Estonians next March to see who joins Northern Ireland, Cyprus and Kosovo in Group C2.

Northern Ireland have never met Kosovo – who were only full granted international football status by first Uefa and then Fifa in 2016 – while you have to go back to 1973 for the last game against Cyprus.

In contrast, Estonia have been regular opponents for Northern Ireland with Ian Baraclough’s side having won a friendly 1-0 in Tallinn as recently as September and the countries also having met in their Euro 2020 qualifying group when a 2-0 home win in Belfast by Michael O’Neill’s side was followed by a 2-1 away success.

With manager Ian Baraclough unable to take part in his scheduled news conference to discuss the draw after contracting Covid-19, it was left to his assistant Jimmy Nicholl to react to what had unfolded in Nyon.

Nicholl he was “quite happy” with his side’s draw but that the squad would “not be taking the competition lightly for a moment”.

The Northern Irish were relegated to League C during the last Nations League after also having a poor campaign in the inaugural competition but Nicholl said the team would have high hopes of making an impact following Thursday’s draw.

“Hopefully we can go out and win this group and earn promotion – you want to move up as high as you possibly can and prove yourself against the better nations,” said the assistant boss.

“Hopefully by June most of the squad will have been playing regularly at club level as you can definitely see the difference when that is the case.

“I’d like to think the players will look forward to meeting up, whatever stage of their international career they are at, that they think we have something going here and they want to be involved.”

The third edition of the Nations League will begin with a quadruple-header in June before the groups are completed with two more games in September.

The link between the Nations League and qualifying for Euro 2024 has yet to be confirmed, but it is expected that group winners will be guaranteed a play-off for the Euros.

The Republic of Ireland last faced Scotland during qualification for Euro 2016 with the Scots earning a 1-0 home before the sides drew 1-1 at the Aviva Stadium.

Ukraine have never faced the Republic before the last meeting between the Irish and Armenia was in 2011 when then manager Giovanni Trapattoni’s side secured a 2-1 win which helped them secure a spot at Euro 2012.

Scotland’s Fifa ranking of 38th is nine spots ahead of the Republic, with Ukraine ranked 25th – helped by reaching the Euro 2020 quarter-finals during the summer – and Armenia certain to be the Group B2 outsiders given their 92nd position.

“Ukraine got to the quarter-finals of the Euros, Scotland have won their last six matches and Armenia have really improved, finishing ahead of Iceland recently in their World Cup qualifying group,” said the Republic manager.

“Obviously, we’re third seeds in the group so not many people would expect us to win the group but that will certainly be our ambition.”

The Blitz: Belfast to mark 80 years since bombing