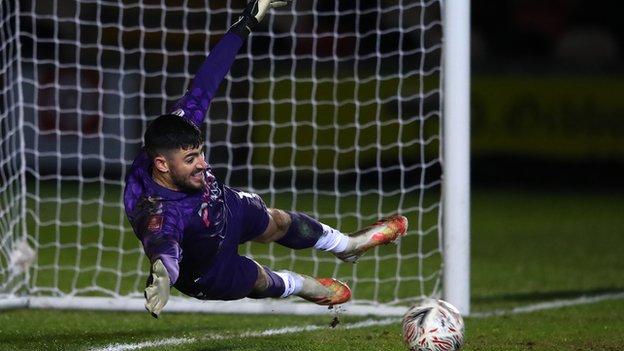 Tom King is yet to start a league game for Newport County this season.

But after an outstanding display in their third round FA Cup defeat against Brighton, the Plymouth-born goalkeeper is now determined to stay in a side chasing promotion – and to join Wales at this summer’s Euro finals.

King, 25, was called up to the national squad in November 2019 without winning a cap.

Against Brighton King made a stunning first-half save from Andi Zeqiri’s close-range volley, before stopping two Lewis Dunk headers and an Alexis Mac Allister shot.

King also made two saves as Newport lost the penalty shoot-out to bow out of the competition.

“It’s been such a hard season for me personally, mentally keeping myself going,” he said afterwards.

“I was just happy to be on the pitch. Anything I can do to help the team is just a bonus for me really but I’m just so disappointed that we couldn’t get a win, I mean the fans deserve that.

“I think on the basis of the whole game I think we defended superbly, the lads in front of me. The fact that I made a couple of saves is a minor part really. We defended unbelievably all night and it’s just so disappointing not to get a result.”

Newport’s first-choice goalkeeper throughout 2019-20, King lost his starting place to Nick Townsend at the start of the current campaign.

King had played only a handful of cup games before coming on as a substitute when Townsend was injured in County’s last League Two game, at Crawley on Boxing Day.

Though Townsend had recovered from the injury to his right knee, King was given his opportunity in Sunday’s third-round tie, having impressed manager Mike Flynn in training.

“What I have found is a new passion for my gym work,” said King.

“You have to be ready to take your chance. I mean I’m on the phone to a friend of mine the other day and I’m a little bit worried saying it might take me a couple of games to get into it and he assured me that football doesn’t allow you those chances.”

“Obviously it’s been tough for me and I’ve had to wait for my chance, but hopefully now I’ve given myself the best chance of retaining my place and seeing it through now.

“Nick’s been unbelievable, he’s played so well throughout the season that I’ve had to raise my game. Even by my own admission the lads will tell you maybe I took it a little bit too easy which is a negative on me, I can’t do that and I’m learning my lessons. I’m only 25.

“I’m still a young kid basically and I’m learning my trade and that’s one thing I’ll take with me that I can’t take my foot off the gas for one second, but Nick’s been unbelievable and he was unlucky with his injury but now I’m in and I’ll be looking to stay in.”

Newport, who also went out of the EFL Cup to Newcastle United after a shoot-out this season, have had their last two league games postponed by bad weather, which has seen the Welsh club lose top spot in League Two to Carlisle United.

However, with games in hand over their rivals and only four defeats in 20 matches King believes they are still very much on course for promotion.

“We’ll be going into every game feeling like we can beat anyone, that’s what we’ve done all season. We don’t fear anyone, we’ve got to be confident.

“We’ve got to respect opponents but not respect them too much and give them the chance to play, we’ve got to be high intensity, nothing changes for us.”

By his own admission King’s call-up to the Wales squad 14 months ago was a surprise, but having stood shoulder to shoulder with Gareth Bale after sealing qualification for Euro 2020, he would love to be involved again for the delayed finals later this year.

“To have that carrot there in front of you, of the European Championships coming up in the summer, it would be an absolute dream to be involved but that’s not in my thoughts at the moment,” said King, whose mother is from Cardiff.

“My thoughts now are maintaining this position that we’ve got in the league and just pushing on and secure this first and then I’ll worry about that when it comes to it.” 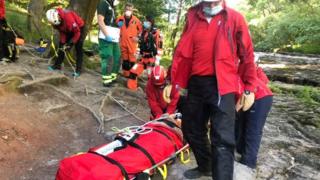