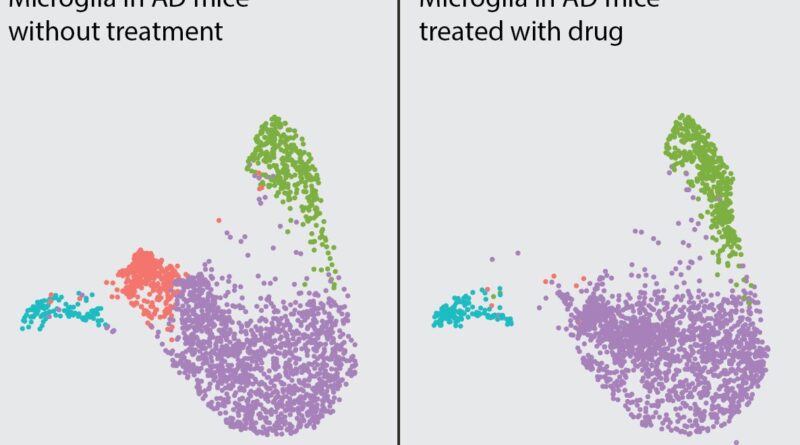 A gene mutation linked to Alzheimer’s disease alters a signaling pathway in certain immune cells of individuals with the disease, according to a new study by scientists at Weill Cornell Medicine. The team also found that blocking the pathway—with a drug that’s currently being tested in cancer clinical trials—protects against many features of the condition in a preclinical model. The results could lead to new strategies to block the development of Alzheimer’s disease or slow its progression.

The study, published Dec. 1 in Science Translational Medicine, focused on microglia, immune cells of the central nervous system that are the first to respond when something goes wrong in the brain. Studies have identified many genetic variants linked to Alzheimer’s disease that are highly expressed in microglia, providing compelling evidence that alterations within these cells may play a role in the disease’s onset and progression.

“Microglia are guardians of the brain under healthy conditions, but can turn detrimental in disease conditions. Our goal is to identify how they become toxic and contribute to Alzheimer’s disease pathogenesis and whether we can identify immune modulators to reverse the toxicity without diminishing their normal protective function,” said senior author Dr. Li Gan, director of the Helen and Robert Appel Alzheimer’s Disease Research Institute and the Burton P. and Judith B. Resnick Distinguished Professor in Neurodegenerative Diseases in the Feil Family Brain and Mind Research Institute at Weill Cornell Medicine.

Alzheimer’s disease is the most prevalent neurodegenerative disease in aging, affecting approximately 46 million people worldwide. Theories point to a number of potential causes, including age-related changes in the brain, along with genetic, environmental, and lifestyle factors. These lead to the accumulation of toxic proteins in the brain—and according to recent evidence, immune system changes—that result in loss of neurons and their connections.

The team then established a mouse model by combining two strains; one that carries the AD-linked mutation in the TREM2 gene and another that exhibits Tau aggregates, one of the major pathological hallmarks in Alzheimer brains. Both patients and mice with the mutation demonstrated memory-related deficits, and their microglia expressed high levels of inflammatory molecules and exhibited an overactive AKT signaling pathway. In the mice, inhibiting AKT with a drug called MK-2206 reversed the inflammatory properties of microglia and protected against synaptic toxicity—a type of damage to the brain’s neurons that is a hallmark of Alzheimer’s disease.

Importantly, because AKT signaling also contributes to the pathogenesis of many types of cancer, MK-2206 is currently being evaluated in multiple cancer clinical trials. Therefore, the safety of the drug is already under investigation.

“We identified a small molecule compound that has been tested in patients with cancer, readily enters the brain, potently modulates the brain’s immune responses, and protects against synaptic loss in animal models of Alzheimer’s disease,” Dr. Gan said. “Our findings support further study of this compound as a potential therapy for Alzheimer’s disease.”

Could Your Diet Lower Your Odds for Severe COVID?

In France, a pandemic dilemma over holiday rights for elders

Nearly 10,000 Chinese overseas nationals have been forced to return to China after coercive means outside the justice system were

Have you seen these men? UK’s 12 most-wanted fugitives who are believed to be hiding in Spain | UK News