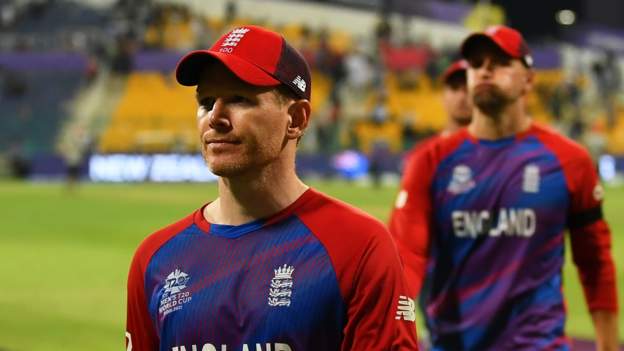 Having cruised through the group stages, Eoin Morgan’s side were dumped out by New Zealand’s dramatic victory on Wednesday.

Speaking on the Good Pace for Radio podcast three days on, England bowlers Mark Wood and Tymal Mills reflect on the defeat, describe the aftermath in the dressing room and look ahead to the Ashes.

‘I thought we could defend it’

England set New Zealand 167 to win after Moeen Ali hit 51 not out. Chris Woakes took two early wickets, reducing the Black Caps to 13-2, but Jimmy Neesham’s 27 from 11 balls sparked a successful chase for the Kiwis.

Wood: It was a total I thought might be hard but I would have backed us to defend it.

About halfway through I thought “if we finish well here we have got this in the bag, comfortably if we do well”.

It just wasn’t meant to be. Neesham just seemed to clear the ropes. There are little things. You look back now and think little things could have gone our way. For two or three days I have felt so flat.

‘I felt so helpless’

New Zealand needed 57 from the last four overs but ended up winning with an over to spare. Having impressed bowling the ‘death overs’ for England in the tournament, Mills missed the semi-final with a thigh strain.

Mills: I was sat on the bench with Liam Dawson and J-Roy [Jason Roy]. J-Roy rides the rollercoaster of emotion more so than any of the other players. He was going nuts when we were taking wickets and then when New Zealand were on top he was down. He was tough to sit next to.

I found it tough watching that second innings, especially when it got to the end. Death overs, that is why I play the game. That is my job. Those are the occasions I love being a part of.

I wanted to get my kit on and run out there and bowl. I felt so helpless. I wanted nothing more than to be out there and helping the lads.

England, ranked number one in the world, comfortably beat West Indies, Bangladesh, Australia and Sri Lanka in their opening four group games before losing to South Africa. They were bidding to become the first men’s team to hold the 50 and 20-over World Cup titles at the same time, following their 2019 World Cup win.

Wood: It feels like a missed opportunity. I know we are missing key players, but we have such a good side. I was almost sure we were going to do it again.

We started the tournament so well I was sure we were going to do it.

It might have been a great game to watch but it just left me feeling really flat. It hurt a lot. I never envisaged us losing games. I truly believed we were going to win. I think that is a positive for our side – our confidence.

Mills: It did feel like we were building towards a final, not to say we were complacent. It is important to give New Zealand credit.

Mills: The dressing room was sombre. I didn’t play and didn’t know where to be.

Everyone is gutted, Morgy [captain Eoin Morgan] was off doing press, everyone else is just in the changing room.

I wanted to just leave it. You say “hard lines” when you come off but when you haven’t played it is not the same. Everyone just wants to be left alone. I just took myself away and went back to the dugout. You feel like a spare part.

He said “we’re all in it together”. There was no blame game.

One of the things that make this team so good is we don’t stand still. We have got another T20 World Cup in a year’s time so we know we have things to work on. We like to push boundaries, get better and be positive.

‘I packed up my daughter’s toys. It was horrible’

After the final the England players returned to the hotel. The next day players’ families and any players not playing in the Ashes or the upcoming Abu Dhabi T10 flew home.

Mills: It was almost like we wrapped all that up, got on the bus, went back to the hotel and that was it. The World Cup was done.

I got back to the hotel at midnight and my wife was having to pack everything while my daughter was asleep.

The next day half of the people we have spent the last five weeks with disappeared. I found that tough.

Our families have been here, the kids have been playing together, the wives have got close and within 12 hours it has all ended.

I bought toys for my daughter while she was here and I had to box them all up and took them straight down to the kids club because I didn’t want to see all her stuff in the apartment.

‘I used to fall asleep watching Ashes tours on TV’

Wood is one of the England players who will fly to Australia on Monday to begin preparations for the Ashes, joining the Test specialists who are already in Queensland. After quarantining, the players face the England Lions in two warm-up games before the first Test on 8 December.

Wood: Now it feels like we are in no man’s land. Mentally I am still hurt from the World Cup. It will be good to get out of the hotel on the flight to Australia.

The Ashes is massive for England and Australia. As an England team, if we win in Australia that is as good as it gets. When I was a kid I remember staying up really late [watching the Ashes]. I would fall asleep with the pillows and blankets on the floor.

Playing the Lions will be good. Usually we play a side that Cricket Australia put out and sometimes they are really good and sometimes are something you will never come up against.

This way we will be well prepared. We have been playing matches so will be more battle ready. 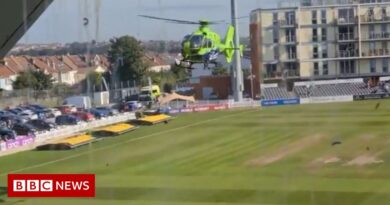 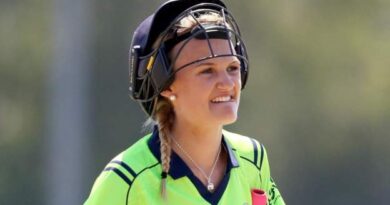