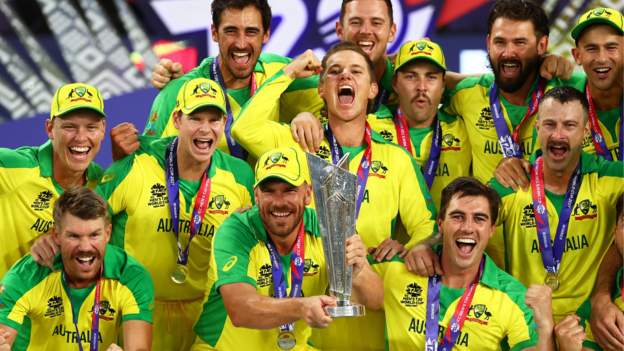 Cricket. Twenty-two people hit a ball around and, in the end, Australia win.

Never mind the fact that they had lost their previous five Twenty20 series and 15 out of 21 matches. When it mattered most, they were left with their hands on yet another trophy.

In winning the T20 World Cup, Australia’s men took the one piece of limited-overs silverware that was missing from their collection. Across the various formats they have won eight global titles, more than any other team.

On top of that, Australia women are the current T20 world champions and will be favourites to win the 50-over World Cup in the spring. Both the men and women are Ashes holders and it will be a pretty big surprise if that changes in the coming months.

On the one hand, there is an argument to suggest that Test cricket and T20 are so vastly different that the outcome of the World Cup will no bearing on what happens when the first Ashes Test gets under way on 8 December.

And yet, because of the rivalry between the two teams and the fact England looked to be sweeping all before them en route to becoming double world champions, it feels like it means… something.

England were naked in their ambition to claim the World Cup, to the point that Test cricket was marginalised on occasions.

Australia barely knew their best team, have been publicly murmuring about coach Justin Langer’s methods and were hammered by England in the group stage, but have still ended up as world champions.

Please, anyone but Australia.

Imagine the contrasting moods when the two sets of players who are heading down under for the Ashes share the same flight on Monday.

Speaking before the final, England bowler Mark Wood said on his Good Pace For Radio podcast that an Australia win would be “unbearable”.

“You can look them in the eye and say ‘well played’, but when you are about to head off for an Ashes series against them the last thing you want will be them feeling confident and waving a trophy around in your face before you have even got there,” he said.

That Australia were not meant to be the champions is in keeping with the unpredictable history of a tournament that has now thrown up six different winners from seven editions.

Like in 2010, when England were so unsettled they switched their opening pair after a Lions side beat the senior XI, only to go on to lift the trophy, Australia have stumbled upon the winning formula at the perfect moment.

T20 World Cups are not about being the best team, but peaking at the right time, with the right time apparently a particular over or even a single delivery – think Carlos Brathwaite’s assault on Ben Stokes in the final five years ago, or Australia and New Zealand surging to upset wins in the semi-finals this time around.

Even though Mitchell Starc conceded 60 from his four overs – a spell so ropey we were well within our rights to think he bowls to the left and bowls to the right – the rest of it was classic Australia.

Josh Hazlewood, the metronome in human form and heir of Glenn McGrath, was supreme in taking 3-16 from four overs, a miserly spell in which he sent down 18 dot balls.

The canter of a chase was led by David Warner, a villain so suited to pantomime he could be King Rat in Dick Whittington.

Whereas previously Warner was so far from his best he was dropped by his Indian Premier League side Sunrisers Hyderabad, he will go to the Ashes with his tyres pumped as the second-highest run-scorer and player of the tournament at the World Cup.

Langer even cracked a smile. He draped an arm around Warner during the drinks break, stood and applauded from the dressing room and dished out bearhugs at the moment of glory.

Still, it might not be enough to save his job or afford him the chance to defend the title on home soil in a year’s time. His contract expires in the new year and it is conceivable he will not be retained despite having the Ashes and the T20 World Cup in his back pocket.

It was Langer who beamed about the “close relationships” between his players. Marcus Stoinis went a step further by saying they “genuinely love each other”.

As for New Zealand, everyone’s favourite second team, this turned out to be a meek surrender when the lights were brightest.

Yes, they had the disadvantage of losing the toss, but had it not been for Williamson’s effortless switch between piano moving and piano playing, the Black Caps would have been even more comprehensively beaten. Even their fielding failed them.

Still, it is time to dispense with any sort of surprise when New Zealand succeed, as if being good blokes or coming from a relatively small country is prohibitive to being an excellent cricket team.

Williamson’s men are the world Test champions, were an outrageous ricochet off Stokes’ bat from winning the World Cup in 2019 and were only one match away this time around.

They are not nice guys finishing last, but smiling assassins. Not dark horses, but stallions primed for stud. Not underdogs, but big dogs.

This night, though, was about Australia. Their 2021 has included a bruising home Test series defeat by India and heavy T20 series losses in Bangladesh and West Indies.

Typical, then, that Australian cricket is reinvigorated just in time for the Ashes.

Zak Crawley: The making of an England batsman