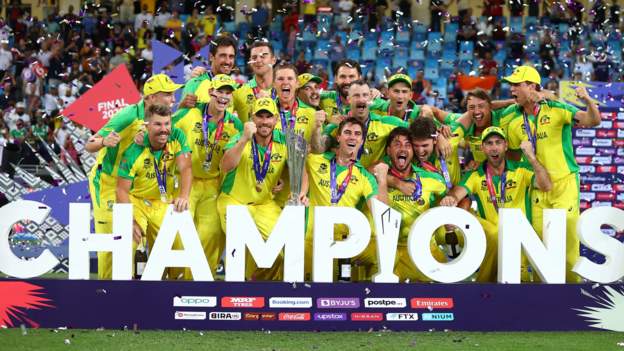 Australia powered to an eight-wicket victory over New Zealand to win the Men’s T20 World Cup for the first time.

Mitchell Marsh plundered a ferocious 77 not out from 50 balls as Australia overhauled what appeared to be a challenging 173 with seven deliveries to spare in Dubai.

The all-rounder shared a dominant stand of 92 with opener David Warner and continued to attack after the opener was bowled for 53 from 38 balls.

Marsh was dropped on 68 but at that stage only 15 runs were needed from 19 balls, the highest chase in a Men’s T20 World Cup final a near certainty.

After Glenn Maxwell hit the winning runs, Marsh was mobbed by his team-mates and dropped to his knees, overcome with emotion having produced his finest Twenty20 innings on the biggest stage.

New Zealand, now beaten in three consecutive white-ball finals, were arguably favourites at the halfway stage after Kane Williamson’s 85 from 48 balls in a total of 172-4 on a slow pitch.

But it was Australia – unfancied before the tournament – who cantered home to join Australia women as T20 world champions.

From written off to world champions

The Australia celebrations began even before the ball had reached the boundary for the final time, the players rushing on to the field to celebrate with Marsh.

His innings will be remembered as one of the best in a World Cup final, the brutal hitting beginning with an emphatic front-foot pull for six off the first ball he faced.

Player of the tournament Warner, dropped by his Indian Premier League franchise before this tournament, was key too, while Josh Hazlewood earlier took an immaculate 3-16.

Together they helped sealed a win that few expected three weeks ago.

Australia lost their five T20 series leading up to the World Cup – during which they were bowled out for 62 by Bangladesh – and their struggles continued in the group stage when they were thrashed by England.

Marsh was dropped for that eight-wicket defeat but ended the tournament as an unlikely hero in a side that completed a perfectly timed rise.

Having won five 50-over World cups, Australia have now completed the white-ball set and will have home advantage when they defend the title next year.

Worryingly for England supporters, this triumph comes only 24 days before the first Ashes Test.

New Zealand were also chasing their first T20 World Cup. Having won the World Test Championship in June, they were aiming to become world champions in the longest and shortest formats.

They were hampered by being asked to bat first and critics of the tournament will point to this being another game won by the side winning the toss.

It gave Australia an advantage but New Zealand’s bowling – their stronger suit and usually so dependable – was not at its best. Too often was Warner given width outside off stump, while Marsh was able to profit from short bowling with pulls.

The Black Caps struggled early in their innings, their top order conservative on a pitch on which batters took time to get going.

Williamson had 21 from 22 balls when he was put down by Hazlewood above his head at fine leg, and needed all his class to accelerate in stunning fashion.

Mixing blows over mid-wicket with delicate glances, he scored 64 from his last 27 deliveries, including 22 from one Mitchell Starc over, whose four wicketless overs cost 60 runs.

Had New Zealand won, the final may have been remembered for Williamson’s innings, but instead Marsh will take the headlines.

Given their Test Championship success, 2021 remains a historic year for New Zealand. Ultimately, however, this is another loss to add to those in the 50-over World Cup finals of 2015 and 2019.

Player of the match Mitchell Marsh: “What an amazing six weeks with this group of men. I love them to death and now we’re world champs.

“I just love playing for this team. I just wanted to get out there and have a presence. I can’t believe it. It’s unbelievable.”

Australia captain Aaron Finch: “It is a huge honour to be able to lead this Australia team. I’m so proud of the way the guys went about it from the start – they were brilliant. I’m so proud.”

New Zealand captain Kane Williamson: “We were trying to get a bit of a platform and the surface was holding a platform. We got what we thought at the halfway stage was a good total, but it was chased superbly by Australia.”

West Indies all-rounder Carlos Brathwaite on Test Match Special: “The brave team won and the team that were a bit tepid came second.

“New Zealand just looked like they didn’t want to lose and Australia looked like a team that wanted to win. Australia are deserving champions.” 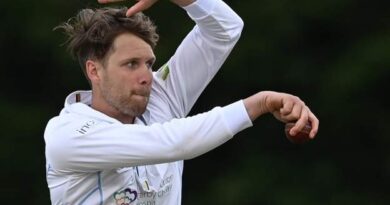 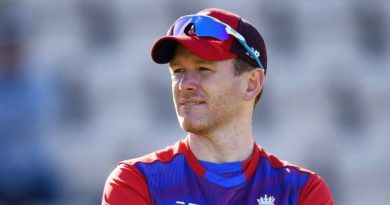