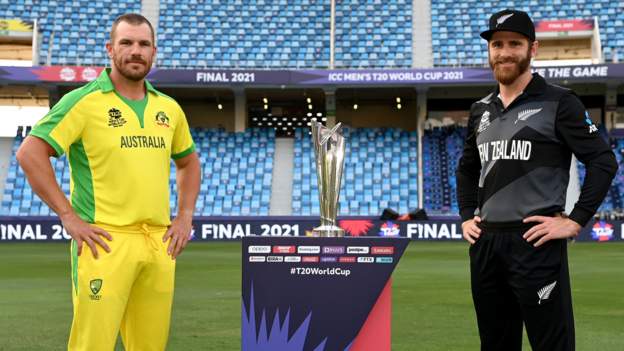 It’s the final few, if any, predicted.

The favourites dropped one by one as old rivals Australia and New Zealand secured a place in Sunday’s Men’s T20 World Cup showpiece in Dubai.

New Zealand, one of cricket’s smallest major nations, could cap an incredible year with another landmark trophy.

“Written off” beforehand, Australia have the chance to secure one of the few pieces of silverware they are missing, less than four weeks before the start of the Ashes.

The trans-Tasman rivals both suffered defeats in the tournament’s group stage – Australia were thumped by England and New Zealand comfortably beaten by Pakistan – but both defied expectations in the semi-finals.

Australia came into this tournament unfancied, ranked sixth in the world and on a run of five straight defeats.

“Everyone had written us off but we had a lot of confidence within,” captain Aaron Finch said at his pre-match news conference.

“It is not unexpected. We came with a clear plan to win this tournament and we still feel we have a squad to do that.”

Earlier this year, the Black Caps claimed the biggest win in their cricketing history, beating India in the inaugural final to become the first Test world champions.

Beaten finalists in the past two 50-over World Cups, they now have the chance to win their first white-ball tournament.

“It would be some achievement,” captain Kane Williamson said.

“Where it stands at the moment there is a game of cricket to play, for us it is focussing on that. It is a really exciting opportunity to be here now.”

Matthew Wade smashed three consecutive sixes to send Australia into the final while opener David Warner, averaging 47.20, and leg-spinner Adam Zampa, who has 12 wickets and an economy rate of 5.69, have impressed throughout the tournament.

New Zealand have been typically solid, their success built around their seam bowlers Tim Southee and Trent Boult, with opener Daryl Mitchell and all-rounder Jimmy Neesham playing crucial roles with the bat in the semi-final.

Finch added: “They are a great team over all three formats of the game.

“They can never be underestimated, maybe people on the outside do, but certainly we don’t. They have firepower, experience, class. I am not surprised one bit.”

Australia win would be ‘unbearable’

Australia have won the 50-over World Cup five times and the Champions Trophy twice, but their best showing in the T20 World Cup was finishing as runners-up to England in 2010.

England came into this tournament as one of the favourites along with India, who were unexpectedly knocked out in the group stage.

There are just 24 days between Sunday’s final and the first Ashes Test and the England and Australia players and staff involved in that series will share a flight to Australia on Monday.

Speaking on the BBC’s Good Pace for Radio podcast, England bowler Mark Wood, one of those on the flight, said it would be “unbearable” were Australia to win.

“I can’t have Australia win that game,” the fast bowler said.

“You can look them in the eye and say “well played” but when you are about to head off for an Ashes series against them the last thing you want will be them feeling confident and waving a trophy around in your face before you have even got there.”

The Black Caps will be without wicketkeeper-batter Devon Conway for the final, who broke his hand during the win against England punching his own bat.

Coach Gary Stead has suggested Tim Seifert, who played in the opening game of the tournament before dropping out, will come in. 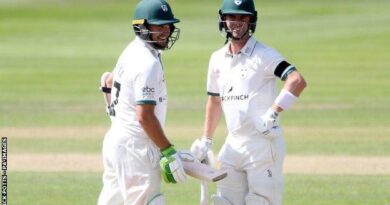