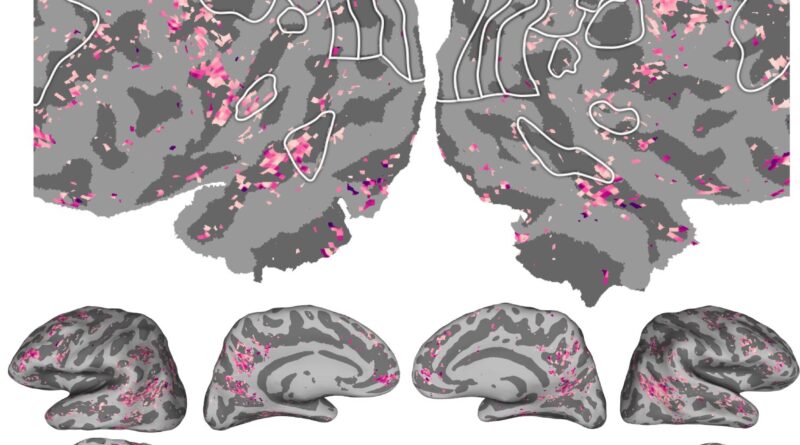 The human brain stores and organizes meaningful information in different regions and networks. While past neuroscience studies have examined some of these networks in great depth, the relationship and interactions between them is not yet entirely clear.

Researchers at the University of California, Berkeley have recently carried out a study examining the relationship between visual and linguistic semantic representations in the brain. Their findings, published in Nature Neuroscience, suggest that visual and linguistic semantic information is organized as a unified map in the brain, with the two representations meeting along the boundary of the visual cortex.

Gallant and his colleagues carried out two different experiments involving the same group of participants. In the first experiments, the participants were asked to watch silent movies, while in the second they listened to verbally narrated stories.

To examine how the participants’ brains represented the information they were presented with, the researchers used functional magnetic resonance imaging (fMRI), a well-known imaging approach that can be used to map patterns in brain activity. They then analyzed the data they collected using high-dimensional and high-resolution computational modeling methods.

“The data analysis and modeling tools we used have been developed in our laboratory over the past 20 years, and they allow us to recover information about how information is represented in the human brain in unprecedented detail,” Gallant explained. “In this specific study, we found that perceptual information enters the amodal semantic network through a series of parallel, semantically-selective channels. Although this was a functional imaging study, these channels of information flow suggest that this system is implemented as a series of semantically-selective anatomical connections.”

As noted above, the semantic network represents the contents of current working memory and attention.

Overall, the findings gathered by this team of researchers suggest that visual and linguistic semantic networks in the brain are connected, forming a unified map. In the future, this interesting observation could pave the way for new research aimed at better understanding the connections between different semantic brain networks.

“This is just the first of many studies that will be required to fully understand the relationship between the semantic system, perceptual systems and long-term memory,” Gallant added.

Citation:
Study sheds new light on how semantic information is organized in the brain (2022, January 4)
retrieved 4 January 2022
from https://medicalxpress.com/news/2022-01-semantic-brain.html

Cataracts Tied to Higher Odds of Death From Heart Disease