St Mirren have requested the postponement of Wednesday’s meeting with Celtic as Covid cases build up at the Paisley club.

They have also asked the SPFL to cancel their visit to Rangers on 26 December.

A statement says: “We are unable to field a team for either match with a significant number of first-team players and staff unavailable.”

St Mirren suspended training last week after an outbreak of positive cases but had a free weekend in the league.

The statement goes on: “We have tried our utmost to fulfil the fixture,” adding that they are in “continued discussions with the SPFL”.

The Japan striker returned from injury to score both Celtic’s goals in Sunday’s Scottish League Cup final win over Hibernian.

Celtic will be without David Turnbull, if the visit to St Mirren goes ahead, and Albian Ajeti, James Forrest, Giorgos Giakoumakis, Jota and Christopher Jullien remain out.

“It is unlikely he will play every game before the break,” said manager Postecoglou of Kyogo.

“We’re obviously going to have to manage through this period. He’s still not 100 per cent.”

Celtic striker Kyogo Furuhashi: “I’m having so much fun and I’m enjoying the challenge. I’m grateful that the manager puts so much trust in me.

“We’re growing into a new team. It’s been really fun for me. The standard’s high. It’s very physical. I hope it’s really fun to watch for the players.”

Did you know? St Mirren have only won one of their past 25 league meetings with Celtic, who are unbeaten in 13 league visits to Paisley.

Scotland: Vote for your favourite image from Serbia triumph 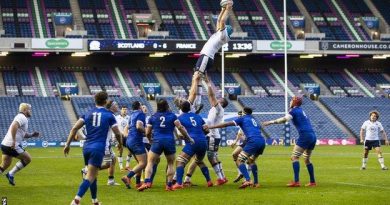 Scottish Rugby could lose £18m because of Covid-19 – Mark Dodson