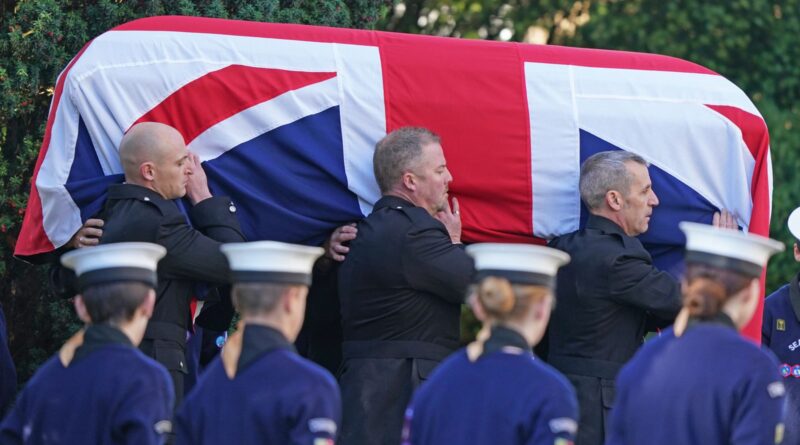 A memorial service has been held in Southend for Sir David Amess whom constituents described as a “compassionate” MP and the “truest of gentlemen”.

It comes after the prime minister said Sir David, a devout Catholic, will be “much, much missed”.

The father-of-five was stabbed to death while holding a constituency surgery at Belfairs Methodist Church in Leigh-on-Sea on 15 October.

His friend and colleague Mark Francois delivered a eulogy at Monday’s private ecumenical service at St Mary’s Church in Prittlewell, while former Conservative MP Ann Widdecombe, also a friend of the veteran MP, read a statement on behalf of the Amess family, who asked people to “set aside their differences and show kindness and love to all”.

They said though their “hearts are shattered” they are “enormously proud” of Sir David and urged the community and beyond to support the many charities he worked with, in lieu of flowers.

Bells tolled as members of the public lined the streets and gathered outside as Sir David’s coffin, draped in a union flag, was brought to St Mary’s churchyard entrance in a hearse driven at walking pace.

Pall-bearers from Southend Fire Service carried the coffin and were saluted by members of 3rd Chalkwell Sea Scouts, as bystanders broke into spontaneous applause.

Boris Johnson earlier told Sky News the Southend service was “a chance for everybody who knew and loved David to reflect on his amazing contribution to politics, to the people of Essex, to Southend”.

He said: “He was a guy who campaigned about things he really cared for whether it was animal welfare, people who suffered from endometriosis, which he brought to widespread public attention, or campaigning against fuel poverty.

“He showed what you can achieve as an MP to change lives of people up and down the country and he will be much, much missed.”

This was the saddest of days for Southend and its people as they said a final farewell to a “legend” of an MP.

So many here had personal stories to share, memories of how Sir David Amess had helped them over the years, how he had made a difference to their lives.

In The Blue Boar pub across the road from St Mary’s Church a sign in the window read “we wouldn’t be here without you”. It turns out that when business rates had left the landlady struggling financially, the MP got involved and campaigned on their behalf. The pub stayed open as a result.

Another constituent, Kelly Swain, told how complications after a mesh operation had left her in a wheelchair and out of frustration she wrote to the local MP. “Sir David literally got me going again, he helped me so much,” she told me. “He was an amazing MP who did so much for so many.”

The horse-drawn hearse was applauded by members of the public as it left St Mary’s Church.

As one onlooker put it: “Whoever takes over from him, they’re big boots to fill.”

Constituent Kelly Swain wrote to Sir David in 2017 for help about some surgery complications she had suffered.

She told Sky News that “from that moment, he was more than just an MP, he became my dearest friend” as he dealt with a lot of the correspondence and hospital appointments on her behalf.

Her friend Natasha Ralph described Sir David as “compassionate” and “the truest of gentlemen”.

Ms Widdecombe told Sky News the family was “devastated”, but added the “outpouring of love and respect” has managed to sustain them.

She said she herself had seen the piles of cards, the masses of flowers, plus messages of support from across the world which have “meant so much to them”.

Asked why Sir David was so admired, Ms Widdecombe said he was “intensely interested in people”.

She said: “You could never ever get him to come away from somebody he was talking to… because he was so interested… in the work of local charities, people who came to see him in his surgery. It was never just a job to David, it was always something for which he had an intense enthusiasm – and that was infectious.

“People knew he was genuine and wasn’t just talking to them because he had to.”

She also shared anecdotes about her friend’s love of animals. His wife would never know what he was going to bring home next, she said.

“He took over my office in the House of Commons when I retired, and immediately, it was unrecognisable because it was filled with fish tanks and bird cages, and all the inhabitants were completely illegal on the parliamentary estate, but none of the long-suffering cleaners complained because everybody loved David so much.”

Mr Francois said he had attempted to bring across some of Sir David’s “spirit of fun” in his eulogy.

“He was a congenial man. He lived life to the full. He was genuinely loved in Southend and that is why I think you have seen this outpouring of sympathy and empathy for him,” he said.

“He had an infectious sense of humour… his bedrocks were his family, his faith and the constituents he worked for. What you see today is an outpouring of love for the man because he did the job and he was an absolutely brilliant constituency MP. He was a legend.”

He described Sir David as “the original Essex cheeky chappy” in his eulogy and told of how Sir David celebrated his knighthood by hiring a suit of armour and turned up at the mayor of Southend’s annual reception on horseback.

“When he was asked what he thought he was doing, he simply replied: ‘I’m a knight’.”

The Rayleigh and Wickford MP told mourners: “Our electors employ us to represent them in a contract renewable every few years… boy, did David Amess honour the contract with his employers – and in his own inimitable style.”

He also said Sir David was “a wonderful husband and father to Lady Julia and their children”.

The service ended with the song We’ll Meet Again. a nod toward Sir David’s support for a memorial to Dame Vera Lynn.

After the service, a horse-drawn hearse carried the casket on a procession through Southend and paused outside Southend’s Civic Centre where hundreds had gathered to pay their respects, and again outside Sir David’s constituency office, Iveagh Hall, before returning to the chapel of rest.

There will be a full requiem mass at Westminster Cathedral tomorrow. 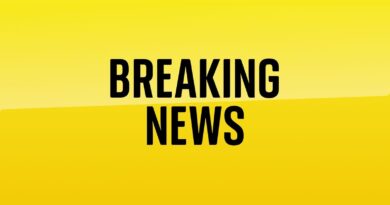 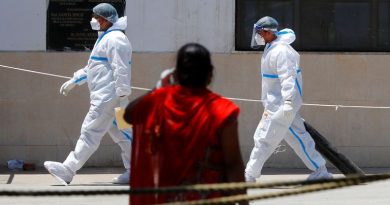 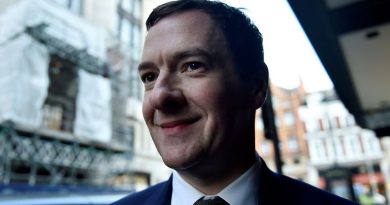