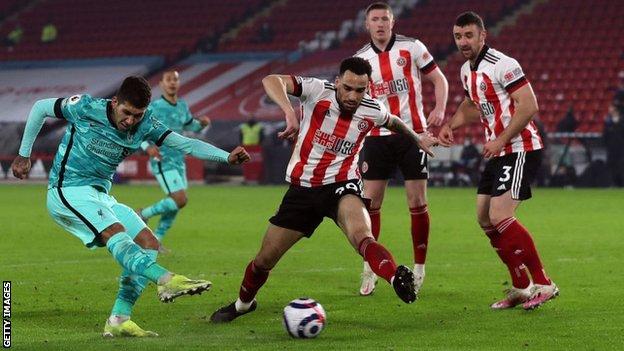 Liverpool ended a run of four successive Premier League defeats and scored their 7,000th top-flight goal during a victory at Sheffield United that moves them within two points of a Champions League place.

Blades goalkeeper Aaron Ramsdale produced a string of fine saves to frustrate Liverpool in the first half as the Reds’ recent lack of cutting edge in front of goal looked set to continue.

But 20-year-old Curtis Jones showed the clinical touch his team-mates had been missing to break the hosts’ resolve shortly after the interval.

Roberto Firmino’s effort then deflected off Kean Bryan and over a stranded Ramsdale as Liverpool doubled their lead with the club’s 7,000th goal in England’s top division.

The Reds are only the second team to achieve that landmark, after Merseyside rivals Everton who have scored 7,108.

The victory keeps Jurgen Klopp’s side sixth in the table and they are now two points behind West Ham in fourth.

Sheffield United were competitive throughout and Oliver McBurnie may have done better when he headed wide while unmarked from Oliver Norwood’s cross.

But the bottom-placed Blades will now have to produce an unprecedented recovery if they are to remain in the Premier League this season.

It is only eight months since Liverpool clinched their first league title for 30 years but Klopp’s side have had to alter their ambitions this season and now find themselves in a battle to make the top four and secure Champions League qualification.

The Reds have already suffered as many defeats in 2021 as they did in their previous 100 top-flight fixtures but a trip to the division’s bottom side proved the perfect tonic for ending a four-match losing run.

It began as another frustrating evening for the Reds when they found Ramsdale in inspired form, and the visitors’ failure to find the net before the break means they have only scored one first-half goal in their past 11 Premier League games.

But Klopp insisted this week his squad does not require a “massive rebuild” this summer and the German will therefore be looking towards the younger players to show they can be counted on.

Midfielder Jones did just that during another competent display when he picked out the bottom corner after Sheffield United failed to clear Trent Alexander-Arnold’s cross to open the scoring.

Firmino then engineered a shot on goal after some smart footwork and the ball found its way in off Bryan to wrap-up the three points for Liverpool with 26 minutes to go.

Klopp will also be delighted with his side’s first clean sheet away from home in eight league matches, despite having to make more changes at the back.

He named a 14th different centre-back partnership in the league in Ozan Kabak and Nat Phillips, and Adrian replaced Alisson in goal following the death of the Brazilian’s father this week, but the visitors dealt with the Blades’ threat comfortably.

Chris Wilder said before this fixture that the “most optimistic” of Blades fans may believe his side can deliver the required results to keep them in the Premier League, though the boss himself remains more realistic.

No side in Premier League history has been 15 points from safety with 12 games to go and stayed up, but that is the task facing Wilder’s outfit after their 21st defeat of the campaign.

The hosts did their best to contain the champions and it proved successful until 48 minutes, largely due to a superb performance from goalkeeper Ramsdale.

The former Bournemouth stopper, who signed for £18.5m in the summer, has only kept one clean sheet in the Premier League this season but made five excellent stops before the break – the most saves he has ever made in the first half of a top-flight game.

The 22-year-old kept out Firmino when one on one and also denied Mohamed Salah from a narrow angle, before palming over a fierce Alexander-Arnold effort and saving Georginio Wijnaldum’s strike from distance.

Sheffield United had the ball in the net themselves when Kabak deflected a looping pass beyond Adrian and into his own goal, but McBurnie was flagged offside.

Adrian made a smart save from David McGoldrick early on and McBurnie also headed wide in the second half after Jones had finally found a way past Ramsdale.

But defeat means the Blades are the first side since Newport County in the fourth tier in 1970-71 to lose at least 21 of their first 26 matches in an English Football League season.

‘Robertson could have had a hat-trick’

Sheffield United boss Chris Wilder, speaking to Match of the Day: “We had a right go but lacked quality and strength in depth. You need your best players to be at the top of their game. You need a bit more in this division because it’s brutal and it exposes you.

“Liverpool have got some world-class players because not only have they been successful on the European stage but also the world stage.

“The two goals we conceded were really disappointing. You have to be perfect out of possession and perfect in possession against Liverpool and we weren’t.

“We haven’t taken chances that have come to us. There in a nutshell is our season. We’re not defending anywhere near as well as we did last season.”

Liverpool boss Jurgen Klopp on Match of the Day: “Everyone who sees Sheffield United playing knows you have to work really hard against them.

“We created an awful lot and should have been 3-0 up. Andy Robertson could have had a hat-trick.

“The clean sheet is very important. Adrian showed pure class and character. I’m really happy for him. He was very front-footed. That was a really good game.”

Jones on target for Reds – the stats