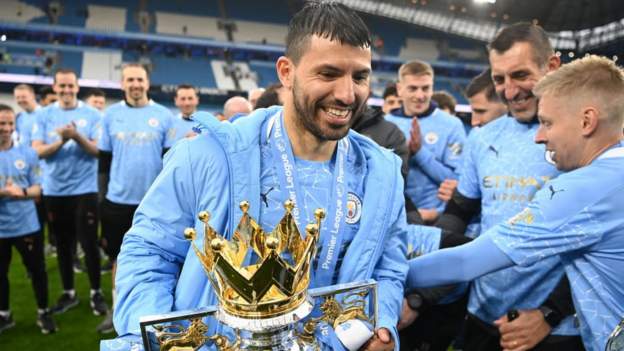 Sergio Aguero has announced his retirement from football within six months of joining Barcelona from Manchester City.

Aguero, 33, made only five appearances for the Catalan side as a result of injuries and health problems since moving to Spain.

He was taken to hospital on 30 October after experiencing “chest discomfort” during a 1-1 draw with Alaves.

Aguero finishes his career with 427 goals in 786 games.

Despite an untimely end to his spell at Barcelona, there can be no doubting Aguero’s status as one of the foremost strikers of the 21st Century.

After starting out with Independiente in Argentina he moved to Atletico Madrid, winning the Europa League in 2010 and scoring 101 goals in 234 appearances.

That record attracted the interest of an upwardly mobile Manchester City, who paid a reported £38m to bring him to Etihad Stadium.

He would go on to become a club and Premier League legend during a 10-year spell in England, winning five Premier League titles, one FA Cup and six League Cups.

Aguero left City in the summer having broken their all-time scoring record, with 260 goals in 390 games, including 16 hat-tricks.

The Argentine is also responsible for arguably the Premier League’s most iconic moment, scoring with virtually the last kick of the 2011-12 season to seal a victory over Queens Park Rangers that earned Manchester City a first top-flight title since 1968 and denied fierce rivals Manchester United by virtue of goal difference.

A sad end with Barcelona

Aguero’s great friendship with compatriot Lionel Messi meant a move to Barcelona was an attractive one after it became clear he would be allowed to leave Manchester City.

He had won over City boss Pep Guardiola, who initially had concerns about the striker’s ability to fit into his style of play, but injuries limited Aguero’s playing time during his final season at the Etihad.

But the switch to Barcelona went badly from the start. The club’s financial problems meant there were problems registering their new signings, including Aguero.

And those same issues led to the departure of Messi to Paris St-Germain.

When Aguero was eventually registered, he suffered a calf injury that kept him out until October.

He scored a 90th-minute consolation in his only El Clasico appearance against Real Madrid, on 24 October, and three days later made his first start for the club.

But his withdrawal against Alaves in October was followed by a “cardiac exam” and Aguero said on social media he would follow doctors’ advice in making a decision about his playing future.

He said he would take 90 days to assess his progress, with reports suggesting he had been diagnosed with cardiac arrhythmia – an irregular heartbeat.

But his decision has come sooner than expected.

His final contribution for Argentina came at the summer’s Copa America, a substitute appearance in the quarter-final victory over Ecuador as La Albiceleste went on to win the trophy for the first time in 28 years.

Analysis – ‘Unfinished business in Argentina but a magnificent legacy’

There were still a couple of things to cross off on Aguero’s list of things to do. One was to round off his career where it all started, at Independiente in Argentina.

When Independiente sold him to Atletico Madrid, they entirely rebuilt the stadium on the proceeds and it was always a dream of Aguero himself and of the club’s fans that he would one day come back and play in the house he built

So scratch that one, it seems. The other one is another World Cup with Argentina because there are a couple of little holes in a fabulous career. One is the Champions League and the other is a great tournament. He did win the Copa America in the middle of the year, but he was a reserve, he hardly got on the field in the knockout stages and he didn’t score.

Although he scored 42 goals for Argentina, and only two men have scored more – Gabriel Batistuta and Lionel Messi – he never truly had a great tournament and quite often come the end-of-season tournaments he was dragging his weary carcass around the field.

Maybe it is a shame Pep Guardiola didn’t get his hands on him earlier because the best tournament he played was the last World Cup in Russia, where Argentina were otherwise an absolute shambles.

Now they are the best team they have been since he started playing for them, it would have been lovely for him to have one last go at the World Cup in a year’s time.

It is not a moment of his choosing but what a legacy he has left and what a magnificent player he was. 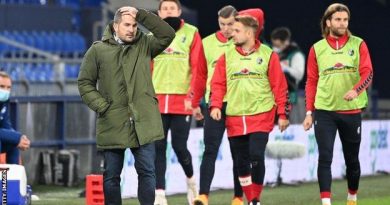 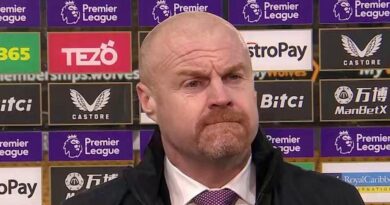 Wolverhampton Wanderers 0-0 Burnley: Sean Dyche says Clarets ‘not as good as we have been’

Tottenham 0-1 Everton: Toffees have the squad to compete – Carlo Ancelotti