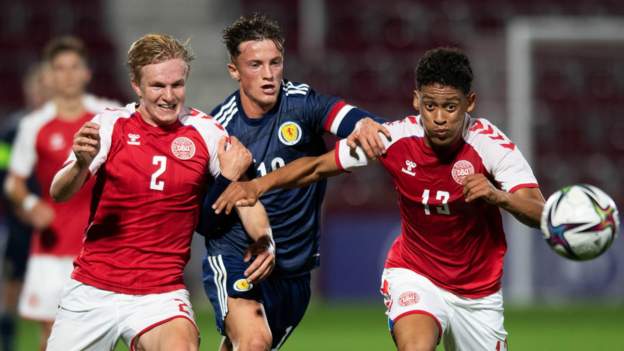 Scotland Under-21s suffered an early blow in their quest to qualify for the 2023 European Championships as Denmark edged a close contest at Tynecastle.

The visitors took the lead after 13 minutes, when Gustav Isaksen’s curling shot deceived goalkeeper Cieran Slicker and crept into the bottom corner.

Scotland struggled to carve clear openings, with Scott Banks’ swerving shot as close as they came.

Scot Gemmill’s side are third in Group I with one point from two games.

They were looking to build on a promising opening draw in Turkey last month as they bid to reach the Euros in Georgia and Romania, but their struggle for goals again cost them.

Isaksen’s opener put them on the back foot, with the Midtjylland forward allowed too much room to come inside on his left foot before finding the bottom corner as Slicker misjudged the bounce of the ball.

The Manchester City goalkeeper did deny the impressive Isaksen’s second attempt as the visitors started strongly.

Scotland, the fourth seeds in the group ,had plenty of possession, especially in the second half, and worked the ball into good positions out wide.

However, too often there was nobody to get on the end of crosses put in by Adam Montgomery, Josh Doig and Jack Burroughs.

Glenn Middleton has so often been the source of goals for Scotland and his shot from the edge of the box forced Danish goalkeeper Mads Hermansen into a rare save, while the St Johnstone winger also fired a free-kick just past the post.

Hermansen also had to spring to his right to push substitute Banks’ dipping shot from the right clear in the final minute of normal time.

However, overall, Denmark – who are the top seeds and also went close twice through Eintracht Frankfurt’s Jesper Lindstrom – were able to see out the match with relative comfort to draw level with Belgium at the top of the group with two wins apiece.

They face Kazakhstan and Belgium in a double header next month as they chase a first victory in the group. 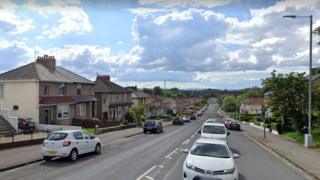 Motorcyclist, 27, dies after crash with van in Glasgow