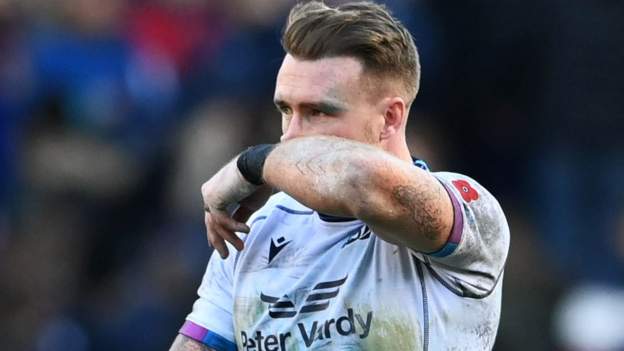 Scotland “shot ourselves in the foot” as they conceded 22 second-half points in their defeat by South Africa at Murrayfield, says captain Stuart Hogg.

Despite leading 10-8 at the break, Scotland were overpowered and lost 30-15 to the world champions.

Handre Pollard and Frans Steyn came off the bench to take advantage of ill discipline and kick nine points to close out the game.

“Basic parts of our game let us down and it’s cost us,” Hogg said.

“It sounds negative, but that’s what we need to be the best.

“We challenged ourselves to come out in the second half and make the most of it,” the Scotland captain – whose two tries took him level with Ian Smith and Tony Stanger as the nation’s record scorers – told Amazon Prime.

“Unfortunately we were second best at times. We’ve almost shot ourselves in the foot there, and it hurts.”

South Africa’s relentless defence forced Scotland into giving away 15 penalties – five at the scrum – at the direct cost of 18 points from the boots of Elton Jantjies, Pollard and Steyn.

They extracted nine turnovers, including three stolen line-outs as their pressure at the breakdown and set-piece told, much to the frustration of Scotland head coach Gregor Townsend.

“I was so proud of the way the team did come back in and get into a position to kick on. Unfortunately, it wasn’t us who kicked on in the last 15 minutes and it was disappointing. It wasn’t who we are or where we are as a team.

Scotland close their autumn campaign against Japan at Murrayfield next week, with Townsend adding his team will be “highly motivated” to avenge their World Cup defeat in 2019.

He also paid tribute to Hogg’s record-setting afternoon on his 87th Scotland appearance.

“I think the first one – becoming the most capped full-back in world rugby history – is the main achievement and is outstanding,” Townsend added. “It shows what a great player Stuart has been consistently.

“And to equal the try-scoring record… we’re all pretty confident he’ll break the record in the next few games or few years because he has a lot of years left in him.

“He’s been a brilliant captain for us in the last two seasons and he showed his quality again today.”

Body found in Ayrshire in search for missing Jackson Mason

'We can't get ahead of ourselves' – Rangers boss Gerrard after draw