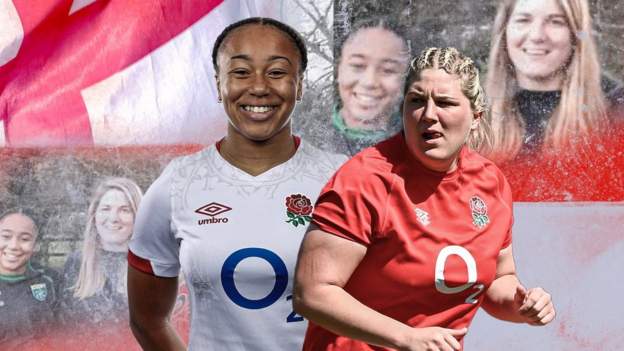 Sadia Kabeya’s rise to her England debut has been swift and at times shocking, but she has been well supported along the way.

Like many sportspeople, some of the 19-year-old flanker’s success can be attributed to a particularly nurturing school PE teacher.

She now calls that school teacher an England team-mate.

Experienced Red Roses and Saracens prop Bryony Cleall taught Kabeya from the age of 14 to 17 at Harris City Academy in Crystal Palace.

“She was definitely one of my big drivers in my rugby career to what it is now,” Kabeya, who starts for England against Canada on Sunday, says.

“Even if she wasn’t so vocal about it all the time, she was planting little seeds in my head and trying to get me to come down to Sarries.

“While she was at the school, she was with England A and then England. Being able to watch someone I know progress through the England pathway made me think ‘I can do that’.”

‘That one kid who plays all the sports’

Cleall never did manage to get Kabeya down to Saracens, with the teenager instead settling at Loughborough, having played for Wasps last season.

But Cleall had good reason to try to get her student to play for her club at the time. At school, Kabeya balanced rugby training with pretty much any other sport she could.

A gifted athlete, Kabeya held school records in the 300m and shot put, and Cleall says it was obvious she was destined for an international sporting future.

“The head of PE always asked me if she was going to play for England and I said yes,” she says.

“You don’t get that raw athleticism. It was raw talent.

“There’s always one kid you go to who plays all the sports because they’re naturally talented.

“That was Sadia. I was like, ‘Sadia you’ve got netball on Monday, all right?’ ‘You any good at football?’

“She would do all the sports for us and rugby is where she stood out.”

‘It was bizarre being in camp together’

Kabeya and Cleall are full of praise for each other, but there is one point of contention.

Cleall was quick to point out that, despite what Kabeya may say, she never showed highlights videos of her own matches in lessons.

Kabeya remembers things differently, saying: “Every time I would walk into the PE office, she would be like, ‘Sadia look at this’ and show me a highlight reel of her clips.

“Maybe she has forgotten – it has been a long time. But I definitely remember.”

Cleall is currently injured, but the pair had been in England camp together over the summer.

For Kabeya, it was handy knowing one of the experienced heads so well, but Cleall found suddenly playing alongside her old student “bizarre”.

“When we were in camp together over the summer, I was going to swear and then I thought, ‘oh no I can’t’,” she jokes.

“I look down and Sadia was tackling me at the legs… how dare she! But seriously, I taught her PE, but the rugby… she is just a born athlete. She’s got no fear.”

‘I tried rugby to get out of a lesson’

Although Kabeya credits Cleall with helping her on the path to England, the Red Rose was not the person to introduce her to the sport.

Kabeya played her first game at 14 before she even really knew the rules.

She recalls: “I was randomly picked out of a lesson and they said they were numbers down on the team so did I want to join?

“It got me out of a lesson, so I did it. I got told what the rules were then that was it.

“It was definitely love at first go. I really enjoyed being able to run as hard as I could. I enjoyed putting my body on the line and my head in places it normally doesn’t go.

“I enjoyed the team aspect too, even though I didn’t really know what was going on.”

When time became tight and a choice between an athletics and rugby career had to be made, Kabeya said the answer was “quite obvious”.

“Even when I was training outside rugby, all I was thinking about was rugby,” she adds.

It is a decision that has been vindicated, with head coach Simon Middleton saying Kabeya could play her way into the squad for next year’s World Cup.

Kabeya says it has been a “whirlwind” since she took up rugby five years ago. If it carries her all the way to the World Cup, where England are one of the favourites to win, she is more than happy with that.

“Since I started playing rugby, everything has been hitting me like I never really expected to get to this point,” she says.

“I’m used to taking on the information, being shocked and excited then just getting on with it. Even now it hasn’t really sunk in that I’ll be playing on Sunday.

“After that happens I’ll look at where I go from there.” 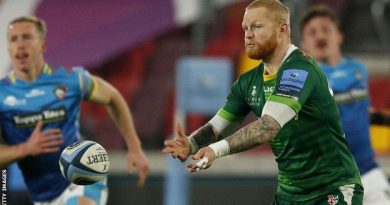 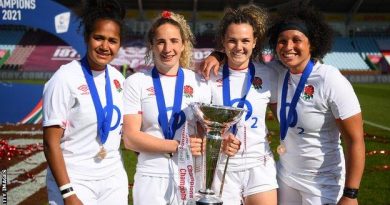 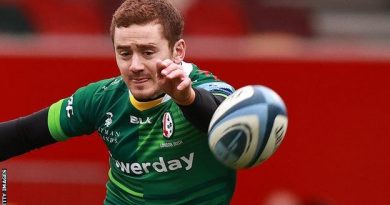