Russia is paying “close attention” to the UK’s flagship aircraft carrier, which lost an F-35 stealth jet after it crashed into the sea, the defence secretary has revealed.

Ben Wallace told Sky News that Russian aircraft have been tracking HMS Queen Elizabeth, its top secret warplanes and a flotilla of supporting ships as they returned from a seven-month, maiden tour to the Far East.

The carrier strike group suffered a significant blow on Wednesday when one of its eight British F-35 warplanes ditched into the Mediterranean shortly after take-off.

It is the first time Britain has crashed one of its £100 million jets – the most expensive, secret and complex aircraft in the UK arsenal.

The Fleet Air Arm pilot managed to eject and was rescued.

But the aircraft, fitted with radars, sensors and other classified technology, is still underwater, with a retrieval operation underway. 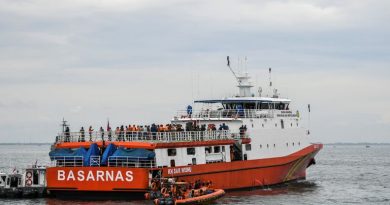 Indonesia plane crash: Relative asks for prayers as he awaits news of parents, sister and her children | World News