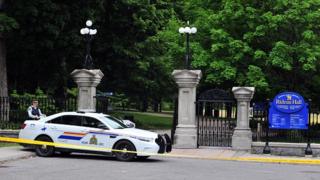 An armed member of Canada’s military faces multiple charges after breaching the gates of an estate where Prime Minister Justin Trudeau lives.

The suspect drove a pick-up truck through the main entrance of Rideau Hall in Ottawa 06:30 local time (10:30 GMT) on Thursday morning.

He then entered the grounds on foot before being confronted by police and arrested two hours later.

He appeared in court Friday morning for a bail hearing.

The Royal Canadian Mounted Police (RCMP) said in a Friday news conference they believe he acted alone. They confirmed the suspect was a member of the Canadian Armed Forces, but they did not identify him by name.

They would not say what he has been charged with, only that there are multiple charges.

Mr Trudeau and his family, who are currently living at a cottage on the Rideau Hall estate while the prime minister’s official residence is being renovated, were not at home at the time of the incident.

Nor was Governor General Julie Payette, who resides at Rideau Hall as the official representative of Queen Elizabeth II, Canada’s head of state.

During a press briefing on Friday, Mr Trudeau thanked “the extraordinary police services of the RCMP”.

“We thank the RCMP and police for quickly resolving the situation this morning at Rideau Hall. All of our staff are safe,” Ms Payette tweeted on Thursday.

The RCMP said it is working closely with the Canadian Armed Forces to investigate the incident, which was resolved “quickly and safely”.

The grounds of Rideau Hall, which sits on an 88-acre (0.35 sq km) wooded estate, have been closed to the public during the coronavirus pandemic.

Pictures taken outside Rideau Hall appear to show damage to its main pedestrian gate, which the suspect rammed through in his vehicle. The vehicle was disabled on impact, the RCMP said.

That is when the suspect began to walk the grounds on foot, police said. The suspect was quickly spotted by grounds staff and RCMP members, who put the area in lockdown.

RCMP officers approached the suspect at about 06:45 local time, and began to talk to him. He was arrested at 8:30 local time.

The RCMP would not discuss the nature of the conversation, as the investigation is ongoing.

Pictures from Thursday show an empty black pick-up truck inside the grounds of the estate. The RCMP said an army unit with a bomb-disposal robot searched the vehicle as a precaution.

Police confirmed the suspect had multiple weapons, though did not confirm the number or type.

CBC News cited a source as saying the suspect had driven his truck from the central province of Manitoba, about 1,900 km (1,180 miles) west of Ottawa.

Mr Trudeau has moved to limit the ownership of certain weapons in Canada, where gun ownership is popular, especially in rural parts of the country.

He introduced a long-promised ban on assault-style weapons in May this year, after a gun a rampage across the province of Nova Scotia that became the deadliest shooting in Canada’s history. 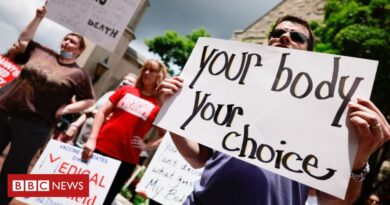