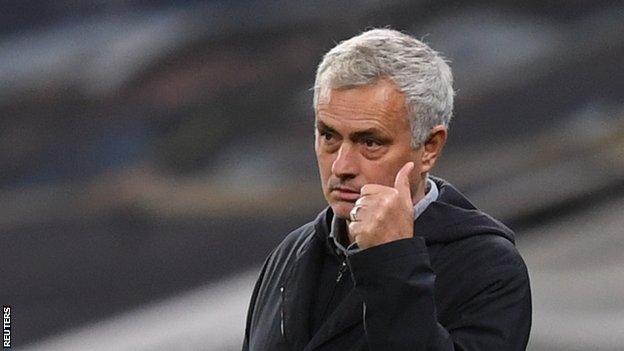 Tottenham boss Jose Mourinho says the return of supporters to games provides “a good feeling” for his players and for the “passion of the fans”.

Up to 2,000 people will be allowed in tier two areas but none in tier three.

“First we have to see which tier London is to see how many fans we can have at a home match,” said Mourinho.

The capacity across indoor and outdoor venues is limited to 50%, and a decision on which areas are in which tiers is expected on Thursday.

“In any case, looking at it by the economical perspective, I don’t think it is good news at all for any club,” added Mourinho.

“But for the passion of the fans, to open the door to some of them, for the happiness of every player, it is a good feeling.

“Best of all, it is that it is the start and, progressively, we can go in a direction where we will have a situation closer to the normality.”

Football across England’s top four divisions has been played behind closed doors since its return in June, following the first coronavirus lockdown.

The Premier League said it welcomed the prospect of fans returning in “small numbers” but it hoped to work with the government to increase this to more “substantial levels” to stop clubs operating “at a financial loss”.

It added: “Our priority continues to be the agreement of a roadmap, with DCMS and the Sports Technology and Innovation Group, for pilot events that can help our clubs quickly scale up to larger capacities.”

Newcastle takeover: Where is the Premier League club’s sale up to?