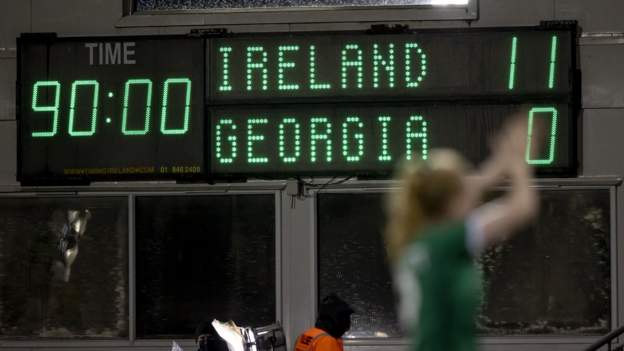 The Republic of Ireland Ireland hit 11 in a record setting win over minnows Georgia in Dublin on Tuesday night.

The hosts were 4-0 up at half-time thanks to an own goal and finishes from Kyra Carusa, Lucy Quinn and Denise O’Sullivan.

O’Sullivan completed her hat-trick after the break before a Katie McCabe double and goals from Saoirse Noonan and Amber Barrett took the lead into double figures late on.

The result means Vera Pauw’s side are up to second in Group A, a point ahead of Finland but eight behind runaway leaders Sweden, who have won all five of their qualifiers so far.

The hosts got off to the perfect start when Arsenal forward McCabe flashed a terrific ball across goal which saw Georgia defender Maiko Bebia diverting her headed clearance into her own net inside four minutes.

Less than midway through the first half, the hosts doubled their advantage through Kyra Carusa.

Louise Quinn rose to meet McCabe’s corner from the right and her goalward header was glanced on by the Denmark-based striker from inside the six-yard box.

It seemed like a matter of damaged limitations for Georgia who struggled to stem the attacking tide.

They arrived in Dublin after suffering three successive defeats without scoring and were no match for Vera Pauw’s side as they found themselves three goals behind after 37 minutes.

Denise O’Sullivan’s deft touch sent McCabe galloping into the box and her measured pull-back was latched onto to by Lucy Quinn arriving at the back post.

Just before the break, Ireland made it four when Ruesha Littlejohn glided into the box unopposed by the Georgian defence and picked out O’Sullivan to side foot, low, past the struggling Teona Sukhashvili.

The Georgia keeper redeemed herself at the start of the second half tipping O’Sullivan’s strike around the post.

However, the midfielder did grab her second of the game on the 58th minute as she hoisted her shot from the edge of the area beyond the reach of Sukhashvili and into the left-hand side of the net for a 5-0 lead.

With 20 minutes still on the clock, Georgia night went from bad to worse with Bebia, who had scored the game’s opening goal, receiving a second yellow card for a deliberate handball in her own box.

Having played a part in four of the six goals and providing two assists, McCabe stepped up and coolly converted from 12-yards to send the home side 7-0 in front.

The captain wasn’t finished there as she doubled her tally for the night three minutes later with a low shot hit first time towards the near post past the outstretched Georgian goalkeeper.

With injury time looming, Amber Barrett was sent bearing down on goal and the Koln player made no mistake, smashing the ball home to break Ireland’s previous record which they set in 9-0 wins over Malta in 2003 and Montenegro in 2016.

Megan Connolly’s free-kick from wide on the left went through a forest of bodies in added-on time and rolled into the net to score the girls in green’s 11th of the night. 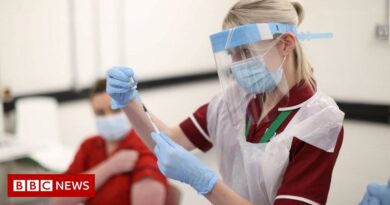 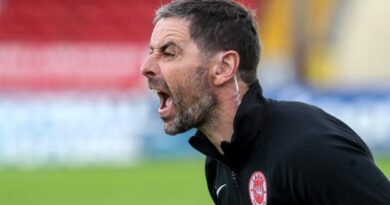