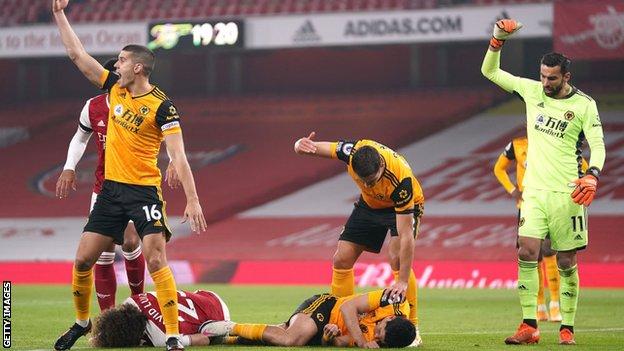 
Wolves striker Raul Jimenez will return to Molineux on Sunday to watch his side take on Tottenham Hotspur.

It will be the first time the Mexican, 29, has been back to the ground since fracturing his skull against Arsenal on 29 November.

The forward suffered the injury in a clash of heads with Gunners defender David Luiz during Wolves’ 2-1 win at Emirates Stadium.

Jimenez was discharged from hospital a week after the incident.

No timescale has been put on Jimenez’s return but he has been a regular visitor to the club’s Compton training ground.

Wolves fans raised in excess of £7,500 for a banner in honour of Jimenez, which was in place for the club’s home game against Aston Villa on 12 December.

Jimenez is expected to watch the game against Tottenham from a private box with team-mate Jonny Otto, who is out with a knee injury.

Salvador Cienfuegos Zepeda: Mexico’s ex-defence minister arrested in the US