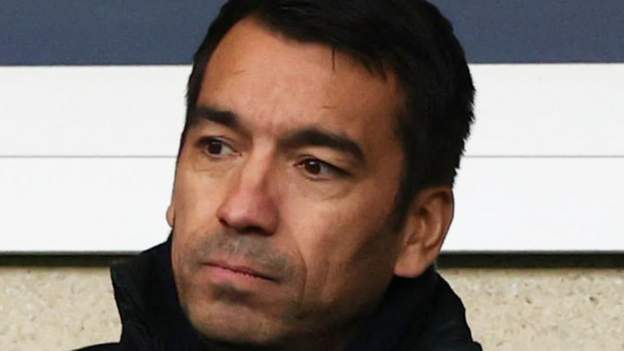 Giovanni van Bronckhorst says there will “definitely” be some changes to the Rangers team as he takes charge for the first time against Sparta Prague.

Victory by a margin of two goals or more on Thursday would secure the Ibrox side a place in the Europa League knockout rounds.

“We were not happy with the result or the goals conceded,” said the manager.

“We have to be much more focused and compact in the defensive side of the match. It is important in Europe to be solid at the back.

“You will see a team tomorrow in a system I like to play and how I feel is best to play against Prague. You will definitely see some changes.”

What did we learn about Sparta?

Sparta’s 1-0 win on matchday two, if anything, flattered Rangers, who were second best until late in the match. That gave the Prague side a foothold in Group A after their opening draw with Brondby.

However, successive defeats by group winners Lyon allowed Rangers to draw level on points with Jindrich Trpisovsky’s side. And, despite a weekend 4-0 loss to Slovacko, Sparta still lead their domestic league.

Rangers manager Giovanni van Bronckhorst: “It is a very short time with the players but they can already sense what I want to change.

“The way we have to prepare physically and mentally, you cannot do everything in two days but step-by-step the players will learn the style of play. They look fresh and sharp, we are well prepared and go for a good result.”

Scotland's drugs deaths: 'There needs to be more help and no judgement'