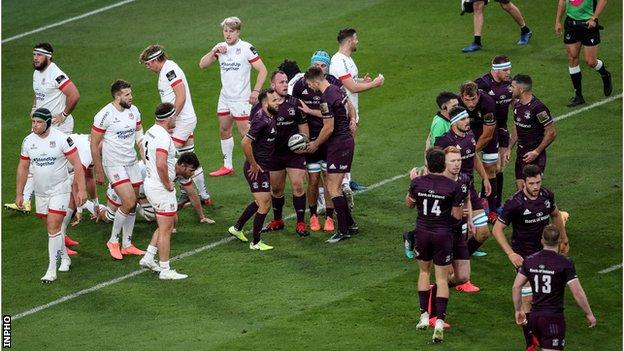 Leinster will carry their undefeated record into next week’s Pro14 semi-final after a deserved three-try win over Ulster.

Leinster will meet either Munster or Scarlets at Aviva Stadium in next weekend’s semi-final while Ulster will travel to Edinburgh having lost both games since the restart.

To add to the northern province’s concern, Ireland duo Jacob Stockdale and Jordi Murphy both limped off the field during the second half.

Such was head coach Leo Cullen’s confidence in his squad that he fielded a totally new side to the one that defeated Munster a week ago.

The province’s impressive depth has carried them through their perfect season to date and they looked by far the more cohesive side in the opening exchanges as Ulster started slowly, as they did a week ago.

On his first start as captain, prop Byrne drove over from close range after a smart grubber kick from the excellent Ciaran Frawley brought Leinster deep into Ulster territory.

Ulster conceded four penalties in the opening 20 minutes as their indiscipline allowed Leinster to dictate the tempo and dominate the territorial battle.

Ross Byrne accepted two opportunities to kick at goal as, for the second time in as many weeks, Ulster fell to a two-score deficit inside the opening quarter of the game.

The northern province did enjoy one purple patch midway through the opening half and opted to kick to the corner having been awarded a penalty inside Leinster’s 22.

But Herring’s line-out five metres from the line was won by Leinster to further frustrate a team still looking to retain their rhythm following the restart.

Despite the wholesale personnel change, Leinster had no such trouble clicking into gear with back-row duo Will Connors and Max Deegan, both of whom made their way into Ireland selection contention during the Six Nations, causing havoc at the breakdown.

While Ulster mostly struggled for big carries Leinster made yards at will, executing several strike plays off the back of set-pieces to control the tempo of an uninspiring first half.

Leinster roll on despite Ulster fightback

As they did a week ago, Ulster improved after the break but by then they were chasing the game.

Herring’s try from a rolling maul on 54 minutes reduced the deficit before a Cooney penalty brought the game back to a one-score affair going into the final 10 minutes.

Ulster were on the front foot before a magical cross-field kick from replacement fly-half Harry Byrne allowed Penny to collect and score to put Leinster back in firm control.

To their credit Ulster did not give in and looked again to have narrowed the gap when Cooney picked off a pass to run the length of the field for a 76th-minute intercept try.

However after a video review the scrum-half was found to have been offside when collecting the ball.

To add insult to Ulster’s injury, Leinster put the resulting penalty in the corner and went through the phases before Harry Byrne darted over from five yards.

‘I self-isolated from coronavirus at sea’