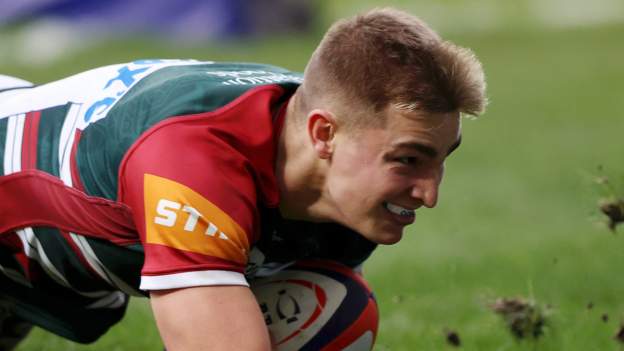 Guy Porter’s late try secured victory after Sam Dugdale’s double got the Sharks within two points of the Tigers.

Theo McFarland starred for Saracens as they defeated Harlequins, and Bristol Bears earned a comeback win over Exeter

Leicester came into the game with eight wins in eight league games and captain for the day Jack van Poortvliet gave them a great start when he intercepted a loose pass to score the first try.

Bryce Hegarty’s boot stretched out a healthy early lead but Sale hit back through good work from the influential Sam Dugdale which led to Arron Reed going over.

The Tigers took a 19-10 lead into the changing rooms and Hegarty’s boot kept the scoreboard ticking over early in the second period but Dugdale crossed the whitewash just before the hour to cut the lead to seven.

The impressive flanker then scored his second try but Tom Curtis missed the penalty which would have drawn Sale level, allowing Guy Porter to seal a 32-23 win in the closing stages following a period of sustained pressure.

Saracens against Harlequins saw the Premiership’s second and third-placed teams meet and it was Kelly Brown’s side who came out on top.

McFarland offloaded to Richard Barrington to open the scoring and Sarries extended their lead just after the half-hour mark when Dom Morris ran in from 35 metres.

Matas Jurevicius hit back for Quins but McFarland’s first try on the stroke of half-time made it 21-7 at the break.

Quins scored the first points of the second period through number eight Archie White but the impressive McFarland scored his second soon after.

Nick David’s try five minutes from time cut the lead to seven and Quins thought they had pulled off another amazing comeback but Will Collier was held-up over the line and Sarries held on for a 28-21 win.

Exeter got off to a blistering start against Bristol scoring twice early on through James Kenny and Jack Walsh to race into a 14-0 lead.

The Bears then lost Welsh fly-half Ioan Lloyd to injury but showed great resolve to earn a penalty try, which was soon added to by Sam Bedlow to level it at 14 each at the break.

A penalty put Exeter back in front early in the second half and when Dan Thomas was sin-binned, Bristol were punished further when Jack Walsh intercepted and ran almost the length of the pitch to score.

But the Bears came back again with tries for Will Capon and the returning Thomas putting them into the lead for the first time just after the hour.

Bears debutant Macenzzie Duncan sealed the comeback win with four minutes left, before Josh Hodge kicked a late penalty to make it 33-27 and earn the Chiefs a losing bonus point.

Newcastle and Wasps played out a highly entertaining nine-try thriller at Kingston Park. Alex Tait got the ball rolling after 12 minutes before Wasps centre Olly Hartley, one of a string of debutants, hit back quickly as the visitors responded well.

The lead changed hands several times through the first half with Newcastle’s Iwan Stephens scoring the sixth try of the opening period to see his side go into the changing rooms 24-17 down.

Falcons reduced the deficit to two points when Josh Basham scored on the right and Tait’s second took them into the lead on the hour, before Gary Graham wrapped up a 34-27 win over an inexperienced Wasps side late on.

London Irish caught Northampton cold as they raced into a 19-0 lead after 20 minutes through James Stokes, Chunya Munga and Hugh O’Sullivan.

The shell-shocked Saints got onto the scoresheet after half an hour through full-back George Hendy but Irish had their bonus point on the stroke of half-time when Benhard van Rensburg made it 26-7.

Saints came out all guns blazing in the second half with James Fish and Josh Gillespie crossing the whitewash. With ten minutes remaining, Tom Litchfield showed great speed to race in and James Grayson’s conversion levelled it at 26 apiece.

But that prompted Irish to up their game again and van Rensburg grabbed his second before Rory Jennings’ boot handed the Exiles a 36-26 win. 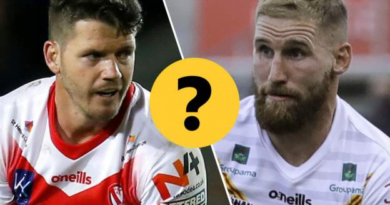 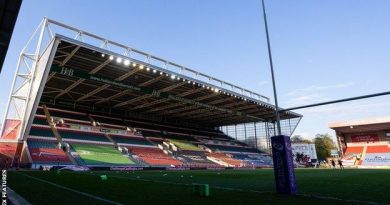