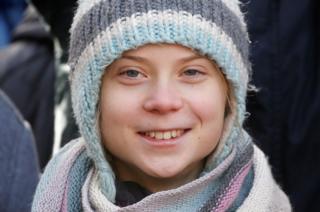 Police are warning parents a Bristol protest Greta Thunberg is due to join has “grown so large” it is unlikely usual safety measures will be adequate.

Avon and Somerset Police say they expect thousands of people at the Bristol Youth Strike 4 Climate on College Green on Friday to hear the 17-year-old climate activist speak.

The force said there was “potential for trips, slips, falls and crushing”.

Parents and carers were advised to make their own safety arrangements.

The Swedish climate change campaigner tweeted over the weekend that she would be taking part in the city’s youth protest.

But in a letter addressed to parents of school-age children, Supt Andy Bennett said the force was “unable to accurately predict how large this event will be”.

“Social media has gone viral with interest which leads me to believe it will be thousands of people,” he wrote.

“We have confirmation of people travelling from across the UK by car, bus, coach and train.

“I am told in Hamburg approximately 60,000 came to see Greta speak. Whilst I am not suggesting it will be this big, you can see the scale of the potential attendance.”

He said the event had been advertised promising areas suitable for both primary school children and disabled people but as a “large-scale organic” event, he said that would “probably be unachievable”.

“In terms of big crowds, they are dynamic in nature and there is the potential for trips, slips, falls and crushing,” he warned parents.

“The event has grown so large that the usual controls, stewarding and safety measures that are routinely put in place are unlikely to be scaled up adequately.”

He added Park Street and the city centre would also be closed to “try and mitigate the risks associated with a crowd too large for the College Green open space”.

According to one of the protest’s organisers, Greta had originally planned to visit London, but as the area planned for the protest in the capital was too small organisers had recommended Bristol instead.

Two years ago, the teenage activist started missing lessons most Fridays to protest outside the Swedish parliament building, in what turned out to be the beginning of a huge environmental movement.

She has become a leading voice for action on climate change, inspiring millions of students to join protests around the world.

UK 'doing absolutely everything we can' to get PPE

Coronavirus: How will the suspension affect football in Britain?