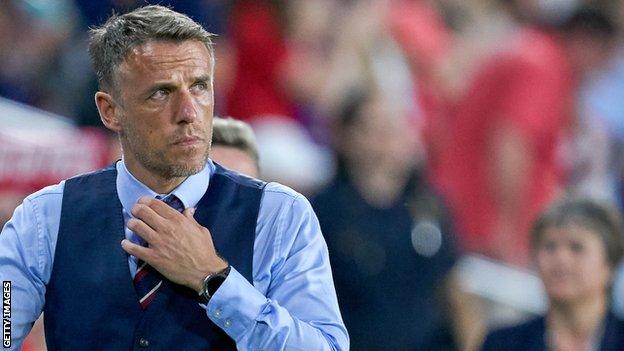 The 43-year-old became England boss in January 2018 and his contract was due to end in July.

He was also set to take charge of Great Britain’s women’s football team at the Tokyo Olympics the same month.

But he will now join friend and former team-mate Beckham at his MLS franchise, which sacked manager Diego Alonso last week after a poor first season.

A Football Association announcement is expected later this week with the organisation now needing to appoint a different Team GB manager.

The former England, Manchester United and Everton defender led the Lionesses to their first SheBelieves Cup victory in 2019 and fourth place at the World Cup later the same year, but results since that tournament have been poor.

Neville’s contract coincided with the 2021 European Championship, to be held in England.

Yet once that was moved to 2022 because of coronavirus and the FA made clear they wanted someone in place for the delayed Olympics and Euros, plus the 2023 World Cup, it was decided that a parting of ways would be more suitable.

The Netherlands boss Sarina Wiegman will take over from Neville as England manager in September.

Alfredo Morelos: What now for Rangers ‘talisman’ after being dropped?