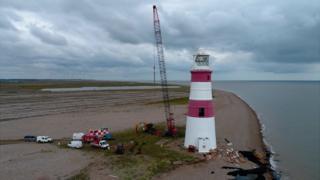 Work is under way to dismantle an historic lighthouse after more than 200 years of duty.

But the Grade II-listed structure on the Suffolk coast is being taken down because the sea is eating up the land on which it sits.

A crane has been brought in to remove its lantern room and it is hoped parts of the lighthouse can be used in a permanent memorial nearby.

The current lighthouse was established 228 years ago on a particularly perilous stretch of England’s coast. Although it is impossible to say how many souls it has helped save during that time, a single storm off Orford Ness, for example, wrecked 32 ships during a single day in 1627.

It took a pounding in 2018’s “Beast from the East” storms, and the sea is now just a few metres from the imposing red and white structure.

Orfordness Lighthouse Trust plans to remove the lantern room and other artefacts that will one day form the basis of a lighthouse memorial on the other side of the Ness, facing Orford town’s quay.

Adrian Underwood’s father Charlie was the last lighthouse keeper at Orford Ness, working there from 1965 until his retirement in 1994 and recognised with an MBE for his service.

Mr Underwood, who published his father’s second book on Orford in tribute to him after his death in 1997, has a small model of the lighthouse in his home in Ireland.

“I spent most of my Sundays on Orford Ness with him,” said Mr Underwood, who, with no other vehicles on the shingle spit, taught himself to drive while his father worked.

“It was just part of life. When I look back on it, I was blessed.

Holding back the sea

To protect the lighthouse from erosion, the Orfordness Lighthouse Trust filled rubble sacks with shingle, bound them together with felt and laid them out in “large sausages” each weighing about 50 tonnes.

This flexible wall has kept the building standing for longer than most expected.

Longer-term defences, such as steel piling or rock armour, would not be allowed due to the Site of Special Scientific Interest (SSSI) status of Orford Ness.

This status has also prevented the cutting-off of the lighthouse at the base and moving it back, as has been done with some others.

Equally, as the sea can continue to cut around the sides, the trust would have had to keep adding to the defences to prevent this happening or the lighthouse could end up on its own small island.

The lighthouse was never designed to be in the sea because the salt water would have made short work of its lime mortar.

The lighthouse was decommissioned in 2013, after which Mr Gold bought it. He describes that decision as one made by a “silly idiot” since it was “always doomed”.

Since then, a small team of volunteers have sought to prolong the life of the building.

“The whole point was the lighthouse had been such a celebrated landmark over so many years since the 18th Century,” he said. “It would be a wasted opportunity to leave it unkempt and sad in its final years.

“We did a deal. The headline price was £2,000 but I had a capital commitment to sort out the taking down and removal of it. I won’t get any change from a six-figure sum.”

Mr Gold previously worked as a financial adviser in London and has always had a passion for buying “one-off buildings”. They include a redundant church and a former US spy station.

The lighthouse “seemed to fold naturally into the family,” he said.

Volunteers from the lighthouse trust must now “deconstruct” the building while there is enough shingle beach left for a crane to come and lift its cap and 14-tonne lantern room – or they will be lost forever.

The team will then collapse the walls inside the lighthouse so that the brickwork does not spill across the shingle beach.

Work is also under way to save as many of the building’s original features as possible, along with its bespoke curved furniture.

While the lighthouse is owned by Mr Gold, the National Trust owns the surrounding Ness, an area with its own place in history as a site for ballistic weapons, radar and atomic research.

But from its point of view, taking on the preservation of the lighthouse would have been too costly.

Nick Collinson, its general manager for the Suffolk and Essex Coast, said the disappearance of the lighthouse was in keeping with the longer life and history of the Ness.

“Orfordness Lighthouse has been an iconic landmark on this stretch of Suffolk’s coastline for centuries, and we are saddened to see it lost,” he said.

“Sitting on such a dynamic shingle spit, constantly changed by the sea, man’s presence here can often feel ephemeral.”

The lighthouse trust hopes to sell off its “local bricks in wonderful condition” to help raise funds to recreate a likeness of its top third more than a mile inland, featuring as many of the original elements as possible.

The nature reserve on which the lighthouse stands is currently closed to the public.

“The lighthouse itself is an emotional thing, certainly for the people of Orford who’ve lived with it on their horizon for generations,” said Mr Gold. 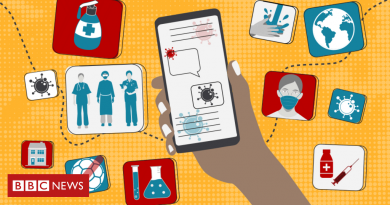