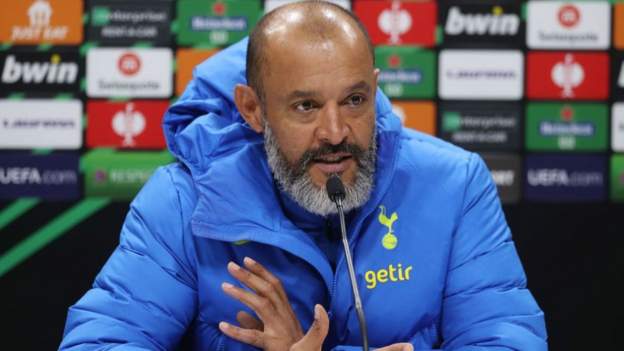 Tottenham boss Nuno Espirito Santo says he is not panicking after a run of three Premier League defeats.

Spurs have slipped from top spot after their opening three games to 11th with losses to Crystal Palace, Chelsea and Arsenal in Sunday’s north London derby.

Nuno insists the players trust in his project despite conceding three goals in each of those defeats and scoring just once themselves.

“Sticking together is the only way to do it,” said the Portuguese.

“We don’t panic because we know, I know. This is football. It’s how you react to the bad moments. It’s something you cannot avoid.

“You go through history, every team goes through a moment like this. The sooner we get out of that the better and tomorrow we go out, we have to win, play better, compete better.”

On Tuesday, the Tottenham Hotspur Supporters’ Trust requested a meeting with the club’s board over growing concerns about issues on and off the pitch.

Spurs have scored four goals in six league games and have had the lowest number of shots of any club in the division, but Nuno says he is “not worried about judgement”.

“I am worried about how we can play better,” he added. “The judgement, the criticism and opinion, all of that is part of it and we have to deal with it.

“That doesn’t interfere in the way we work. It can only distract us. I’m simply telling you that my focus is how can we improve?”

“It’s the moment to deliver. Now we have to give them good things to feel. They see a team that is solid and playing good when things go back to normal.”

The former Wolves boss is also confident his squad have belief in his methods.

“There are no doubts about that because we work together everyday,” he added. “In these moments we have to stick together.

“The belief is the first step to do things and we have it.”

‘We need decisions that protect us’

Giovani lo Celso and Cristian Romero have been named in Argentina’s 30-man squad for their games with Paraguay, Uruguay and Peru from 8-15 October, despite the country remaining on the UK’s travel red list.

Tottenham travel to Newcastle on 17 October, but currently anyone arriving in the UK from Argentina must quarantine for 10 days. Previously, both spent the time training in Croatia before returning to London.

“What we are concerned about is the governing bodies making a decision that can protect the clubs in this international break,” added Nuno.

“What we don’t want is the same situation repeated again, where we don’t have our players. I always say it’s very difficult to say no to an international team. It’s never been the case before.

“We are facing a situation through the pandemic. What we want is protection as a squad. We need decisions that protect us because we want our players in national teams and them available for us also.”