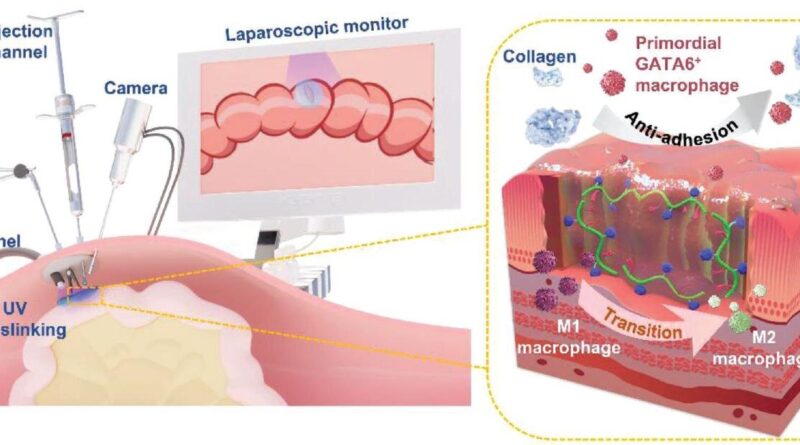 Up to 90% of patients who undergo open abdominal or pelvic surgery develop postoperative adhesions, or scar tissue. Minimally invasive laparoscopic surgical approaches can reduce the severity of the adhesions, but the scar tissue still forms. The cellular response to injury—even intentional injury, such as surgery to repair a problem—results in a cascade of molecules pouring to the site to heal the tissue. But the molecules, working quickly to close the wound, often go too far and bind the wound to nearby healthy tissue. Depending on the location, the resulting scar tissue can cause chronic pain, bowel obstruction and even death.

There may be a potential solution available soon, according to researchers from Southern Medical University in China. They have developed an injectable hydrogel that can plug up wounds without sticking to off target tissue, effectively preventing postoperative adhesions.

Their approach, tested in rats and rabbits, was published on Nov. 18 in Advanced Functional Materials.

According to paper author Yaobin Wu, associate professor, Guangdong Engineering Research Center for Translation of Medical 3D Printing Application, Southern Medical University in China, many antiadhesive barriers are hydrogels inspired by mussels, marine animals that can adhere to strongly to other materials. Hydrogels can bond to wet tissue and are typically designed as double-sided adhesive materials, which increases the risk of postoperative adhesions. A class of hydrogels are asymmetric, with only one adhesive side, which reduces the risk of adhesions, but their preparation method makes them uninjectable and unsuitable for laparoscopic surgery, Wu said.

“Alternatively, liquid or glue antiadhesive materials are injectable and can be administered easily during minimally invasive surgeries, but they are often displaced and diluted in the dynamic and wet physical environment of surgical sites,” Wu said, noting that their composition can also trigger a molecular response that promotes adhesion formation. “We set out to design and prepare an injectable barrier with superior tissue retention properties that can prevent adhesion formation following minimally invasive surgical procedures.”

Previous research suggested that polyanionic ligands, molecules that bind and render ineffective many types of other molecules, combined with hyaluronic acid—a gooey molecule that plays a major role in the support network of all animal cells—could make for an effective injectable hydrogel, Wu said.

“However, there was no report on the design of an injectable and asymmetrically adhesive hydrogel based on a polyanionic ligand that could prevent the aggregation of scavenger receptors and can be concurrently administered during minimally invasive surgical procedure to prevent adhesion formation,” Wu said.

The researchers formulated such a hydrogel, dubbed HAD, with a photocurable twist. When injected, the side of the hydrogel not touching the wound was cured with an ultraviolet light for three to five seconds. Similar to its function in a gel manicure, the UV exposure dried the hydrogel and prevented it from sticking elsewhere.

The compound proved compatible with human cells, so the team tested the HAD hydrogel in surgeries on rats and rabbits. In the rats that received HAD, as opposed to versions of the hydrogel without ligands or pure saline, most inflammation had subsided and there were no obvious adhesions 14 days after surgery. Critically, Wu said, the mortality rate in the non-HAD recipient groups was roughly 30 to 50%, while HAD-recipient rats all survived.

The same findings were made in the rabbit surgeries.

“The results indicate that this injectable HAD formulation is suitable for delivery during a laparotomy to form an instant antiadhesion barrier in situ with good wound healing effects,” Wu said.

“The mission of our team is building a bridge between the gap of biotechnology research and clinical applications,” Professor Wenhua Huang, the director of the Research Center, said. “We believe that the administration of this HAD injectable hydrogel with controllable asymmetric-adhesive properties can be readily integrated into laparoscopic surgeries in clinical use.”

The researchers plan to continue studying and verifying the clinical value of HAD hydrogels, with a specific focus on how the compound may help heal chronic wounds and prevent adhesions in a variety of diseases. 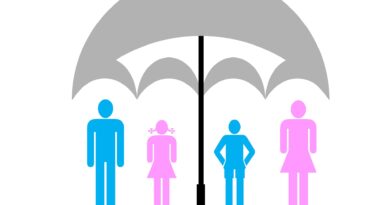 How a simple tool has brought health insurance to thousands