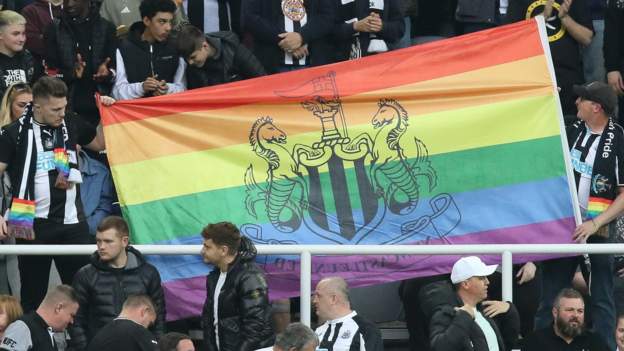 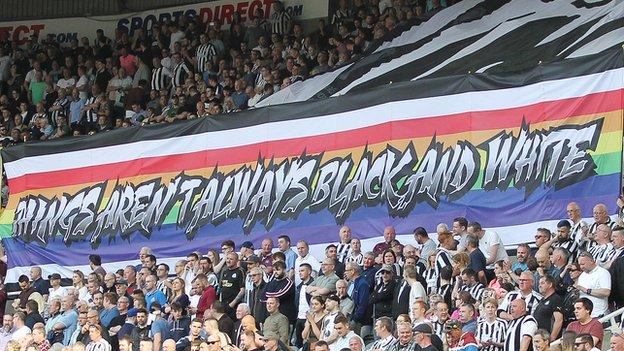 “It’s been a harrowing five weeks,” says Ian Pearson-Brown. “I’m feeling very jaded, because a lot of the positive work we’ve done is all completely lost.”

The Saudi Arabian-backed purchase of Newcastle United is considered by many to be the Premier League’s most controversial takeover.

And Pearson-Brown felt conflicted when it was approved by the league in early October.

“The positive side was: ‘Well, at least we’re not for sale any more,'” he tells the BBC’s LGBT Sport Podcast.

“So the relief was that we are no longer on this cliff edge.”

But as fans gathered outside St James’ Park to mark the end of the Mike Ashley era, Pearson-Brown knew the actions of United with Pride – the Newcastle United LGBTQ+ fans group he co-chairs – were about to go under the spotlight.

Why is the takeover controversial?

Many Newcastle fans welcomed the £305m takeover, weary with a perceived lack of ambition and investment during Ashley’s 14 years as owner.

Critics of the Gulf kingdom’s human rights record, though, condemned the decision to approve the deal, and Amnesty International requested a meeting with the Premier League to discuss it.

Most of the questions around the deal concerned Saudi Arabia’s Public Investment Fund (PIF), which now owns 80% of the club and is chaired by the state’s Crown Prince, Mohammed bin Salman. The Premier League said it had received “legally binding assurances” that the Saudi state would not control the club.

But the takeover was described as “heartbreaking” by Hatice Cengiz, the fiancee of murdered journalist Jamal Khashoggi, who died while visiting the Saudi consulate in Istanbul in October 2018. Western intelligence agencies believe the crown prince approved the murder, which he denies.

And attention has been drawn to the Gulf kingdom’s intolerance of same-sex relationships. Under the country’s interpretation of Islamic law, the death penalty is a possible punishment for same-sex conduct.

United with Pride released a statement on the day the takeover was completed, welcoming the new owners and expressing the hope that working with them could end up being “a positive influence to improving the conditions for the LGBTQ+ community in Saudi Arabia”.

But while some online supported that position, it was described as “naive” by human rights organisation Fair Square, while critics also said it was at odds with the group’s statements prior to the takeover that “there was no room for discrimination… or homophobia in football”.

“We all knew there was going to be a lot of spotlight and interest on our views from a human rights perspective,” Pearson-Brown says.

“But the narrative has been hijacked by some people who believe that we, as football fans, should be doing something about the human rights issues in Saudi Arabia because our owner is from that country and has taken a role in running it.

“Now, there are arguments for and against that, and we’ve taken a position that everyone in our group has been OK with. But some groups outside of the north-east have gone on the attack.

“It’s difficult to see where the value is in helping LGBT people in Saudi Arabia by attacking football fans here who just want to go to a game and sit in an environment where they feel safe to be their authentic selves.”

Pearson-Brown says those attacks are coming on social media, and that some have been so extreme that they’ve been reported to the police.

“One of the things that makes it really challenging for us to want to keep going isn’t that we have Saudi Arabian owners,” he says.

“It’s that we know that, whatever we do from this point onwards, we’re going to get a lot of social media abuse.

“In recent weeks, we weren’t able to enjoy the day that Josh Cavallo came out. That was a landmark day for anybody who has devoted time to improving the environment in sport for people to be their authentic self.

“But that day we had to spend trawling through the latest social media pile-on because Newcastle United had tweeted congratulations, and there was just so much traffic and abusive comments around that.

“It’s been quite a difficult time for us as volunteers, and mental health has become a really challenging situation.

“I’ve had people on the verge of walking away, resigning, downing tools and such like – not because they disagree with the position that we’re in, but because of the sheer volume and weight of online abuse we receive.”

‘If we sense we’re being used as a puppet, you may well find us protesting’

In the weeks following the completion of the takeover, part-owner Amanda Staveley said that Newcastle United would continue to be part of the Premier League’s anti-discrimination campaigns.

And while Pearson-Brown says United with Pride is committed to working with the club on their inclusion policies, that support isn’t unconditional.

“We can’t do anything at present about conditions in Saudi Arabia,” he says. “If we get the chance to do that further down the line with our relationship with Newcastle United, then we will absolutely do it.

“And if we get a sense for a second that we’re being used as a puppet by some regime, then you’ll find we’ll be releasing a different statement – and you may well see us protesting outside of the stadium.

“But until that happens, we’re not going to jump the gun and burn all our bridges.

“That doesn’t mean our members are not empathetic with the people of Saudi Arabia. It just means they want us to take a pragmatic approach.

“If you want to improve the conditions for people in Saudi Arabia, talk to Amnesty International, talk to the Saudi consulate, talk to the UK government who engage with them all of the time.

“We have zero influence on who owns Newcastle United Football Club… and we just hope that, over time, people come to realise that attacking us doesn’t get the results you want.”

Ian Pearson-Brown was speaking to Jack Murley on the BBC’s LGBT Sport Podcast. You can hear new episodes every Wednesday on BBC Sounds. 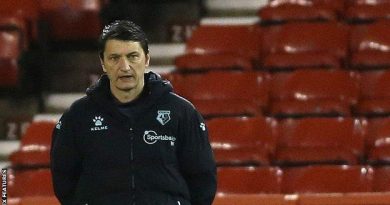