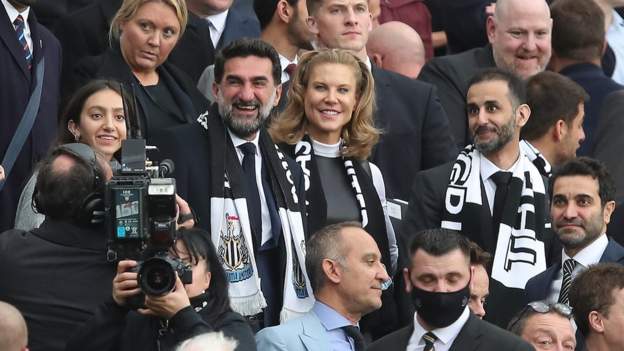 Eighteen clubs voted in favour of the ban at an emergency meeting on Monday.

Newcastle voted against and Manchester City abstained, with both questioning the legality of the move.

It means a temporary one-month ban on deals linked to club owners while the issue is debated further.

Top-flight teams complained to the league after the Newcastle takeover was completed on 7 October because of frustration about how the deal passed the owners’ and directors’ test.

The Premier League said it approved the takeover after receiving “legally binding assurances” that the Saudi state would not control the club.

The Public Investment Fund (PIF), which will provide 80% of funds for the deal, is seen as separate to the state.

This is despite the Crown Prince of Saudi Arabia, Mohammed bin Salman, being listed as chair of PIF.

PIF has assets of £250bn, making Newcastle one of the richest clubs in the world.

Manchester City’s stadium, training complex and shirts are sponsored by Etihad, the airline of Abu Dhabi. City’s Abu Dhabi owners took control of the club in 2008.

City successfully overturned a two-year ban from European club competition for committing breaches of Financial Fair Play rules after they were cleared of all the major charges around manipulation of sponsorship deals at a Court of Arbitration for Sport appeal last year.

The Premier League’s own investigation into City for breaching FFP rules has yet to reach a conclusion.

Euro 2020: The last time England and Scotland met at the Euros