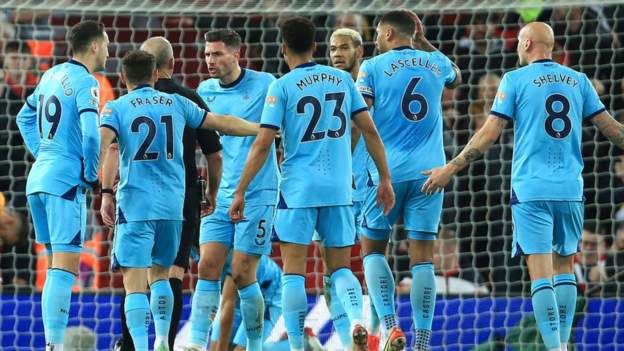 Newcastle boss Eddie Howe said it was “very unjust” Liverpool scored while Isaac Hayden lay on the ground with a head injury in the Reds’ 3-1 win.

Howe’s side went ahead through Jonjo Shelvey but Diogo Jota’s equaliser was awarded by referee Mike Dean despite Hayden lying in the penalty box.

“Two of our players were on the floor and one was holding his head,” he said.

Howe, whose side remain 19th in the Premier League table, added: “We had two players out of the game that would be defending that cross and I think that’s very unjust.”

Following Jota’s equaliser, Mohamed Salah scored his 22nd goal of the season before Trent Alexander-Arnold put the game beyond doubt with a fine strike three minutes from the end.

But Howe said the first Liverpool goal was “the turning point of the game”.

“I can’t understand how Mike has not stopped the game,” he added. “Isaac was clearly holding his head immediately, lying in our six-yard box with another player and of course that leads to the goal.

“I couldn’t believe the game wasn’t stopped For me, that’s a key moment in the match.

“The priority has to be the safety of the player. We talk a lot at the moment about head injuries and I felt it was a wrong decision.

“There was no acting from the player. He was down. He couldn’t continue and we paid the price for it.

“We’ve been really harshly treated today and it follows a similar pattern really of other games where we’ve not had the rub of the green or the decisions are going against us for whatever reason.

“But tonight, I think when you play at Anfield and you’ve got the lead, suddenly [after Jota’s goal] the crowd are in the game and Liverpool are on the up and that made it very difficult from that moment onwards.”

The former Bournemouth boss added: “It’s not the time of year for us to lose players and fingers crossed he’s the only player who will probably go into the Christmas period now in any doubt.”

Forward Allan Saint-Maximin also limped off late on to be replaced by Callum Wilson, who was rested.

But before Sunday’s game at home to Manchester City, Howe said he did not know what the French player’s injury was.

“He’s such a big player for us, we don’t want to lose him for any amount of time,” Howe said.

‘Surprised he didn’t blow the whistle’

Former Liverpool defender Stephen Warnock told MOTD: “When you see a player go down holding his head, the reaction is straight away the referee blows his whistle. You can see players waving it is a head injury, you can clearly see Hayden is holding his head. Very surprised he doesn’t blow his whistle.”

Ex-Everton midfielder Leon Osman on MOTD: “If there is any suspicion of a head injury, you would expect to see it stopped. We expected it would have been stopped, but players are going to have to start defending their six-yard box first because referees clearly aren’t stopping the game.” 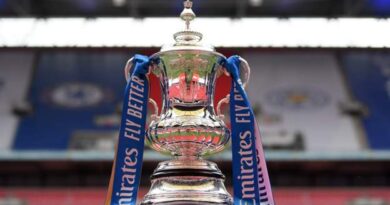