My Money is a series looking at how people spend their money – and the sometimes tough decisions they have to make. Here, Jen Smith, a children’s TV presenter from Shenzhen in southern China, takes us through a week in her life, as the country slowly emerges from the coronavirus pandemic.

Since being in lockdown I’ve been bingeing on Keeping Up With the Kardashians. It starts with one episode after dinner, blink, and suddenly it’s 3am. YouTube, Facebook, Google and Instagram are all banned here, so you’d think I’d be a binge-free socialite after a year and a half living in China. Well, those sites are banned unless you have a VPN – I pay $120 (£97) a year for mine, so Sunday was a late night, with a lie-in until 10.30 this morning.

Today is a bit of a crazy day in the studio. I work as a children’s TV presenter. My company has profited from the lockdown as more children are watching the shows non-stop – meaning a rapid turnaround for us.

We shoot two shows from 2-6pm then “break” for a meeting. We discuss tomorrow’s shoot while I eat dinner – homemade aubergine curry. It is normal for the Chinese to eat breakfast, lunch and dinner at work. Normally the company gives all staff 25 yuan through a food-ordering app, and the whole company would eat together. However, because of the current social distancing, that social time is in the far distant past!

I make it home for 8pm, order some deep-fried cauliflower as a snack (45 yuan) and start the inevitable Kardashian binge.

It’s a much earlier start (7.30am), but the same morning routine. On my cycle to work I notice that the traffic is almost back to normal – Shenzhen is inhabited by well over 12 million people, so as you can imagine rush hour is intense. This doesn’t change the fact that everywhere you go you have to scan a QR code – leaving my apartment, using the walkway by the river, and getting into the building I work in.

After a morning of shooting I eat homemade potato curry and settle down for a nap. Naptime is such a commonality in China that people store camp beds at the office. I order a coffee and banana chips (20 yuan) for a pick-me-up before the afternoon’s shooting.

It’s St Paddy’s Day so I head to the local pubs area, catch dinner at a French restaurant (222 yuan), then a few drinks (25 yuan – mainly bought by men at the bar for us) before a very tipsy cycle home.

The morning’s shoot (thankfully) was cancelled, so I nursed a hangover in bed until around 11am, at which point I had a phone meeting for a company that I do “plus-size” modelling for (for context I’m a UK size 12). I eat a bowl of cereal and order more cauliflower (45 yuan) while I watch a film.

At 2.30pm an intern picks me up, and we head to the government building to apply for a new work visa. Ironically, the image taken for my visa is Photoshopped to remove wrinkles, freckles and my frizzy hair. When I ask why this is being done for an identification document, the intern replies that the government wants it to be neat, and “the Chinese way” is to have altered photos.

I don’t argue, and have an interview before I hand in my passport. The whole process takes around two hours, so I order food to my house while on the way home (150 yuan for burger, salad and cake!) I take a taxi across town which ends up being 39.05 yuan.

More blogs from the BBC’s My Money Series:

The day starts at 8.30am with coffee and reading, before I get a manicure (280 yuan). My nail lady has been very worried about the state of my hands during the virus, so she spends a whopping two and a half hours treating them while I watch a film (0.99 yuan – bought by her). Because the manicure was so long I don’t have time to eat lunch before our fitness shoot, which runs from 2-5.30pm. I then have an appointment to sign into a building which I’ll shoot in tomorrow.

The building is near a supermarket called Ole (one of the only western supermarkets), and I pick up groceries for 183 yuan before heading home to cook, listen to podcasts and prep for the big day of shooting on Friday.

Fridays are generally my busiest day. The way the Chinese seem to function, is a boss will say “I want this done now” and then employees rush to finish it. Generally, they will write scripts on Monday and Tuesday, discuss Wednesday, then we shoot later in the week. The poor editors, despite mandatory office hours during the week, then have to work tirelessly through the weekend to achieve a Sunday evening deadline.

I start with mashed avocado and a hard-boiled egg before work. The morning shoot runs from 9.30-11.40am, and I have an early lunch – homemade curry again, before my regular nap time. The afternoon shoot is three hours, so I have time to pop home and shower before a live stream at 6pm. I take a taxi to and from the live stream which ends up being 28 yuan.

Finally the weekend! Although things are slowly getting better in China after the coronavirus outbreak, there’s still not too much to do. So I use this time to write, play my piano and generally chill inside. Around 3pm, I venture outside to the shops to pick up some snacks (159.60 yuan) before settling in to ring my family back in the UK with a homemade cocktail – a friend of mine in Canada is doing a daily live stream, “quarantinis” where he teaches you how to make cocktails!

What’s interesting is that a lot of people have started leaving their houses again, but it is still illegal to go outside without a mask on, and temperature checks are taken everywhere. I was even refused entry to a building due to being foreign. I imagine this is because recently the only new cases are being brought in by non-Chinese travelling back to China.

It’s another slow day for me as many foreigners have not yet returned to China, so most of my friends are out of the country. I start the day by reviewing potential scripts.

This takes me to 1.30pm without realising I haven’t eaten. I decide to go for a quick run and I return to eat mashed avocado and a hard-boiled egg.

I home-bleach my hair with products bought in the UK, then head back to editing again. About half way through the afternoon I take a little break to practice Chinese. I use an app which is fantastic and free! Definitely worth everyone downloading this during social distancing so you can learn new skills!

For dinner I order online again, a three-dish meal for 160 yuan.

Portugal: No decision yet on UK holidaymakers 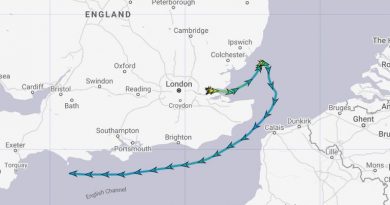 Suez Canal disruption: Where are the ships that decided to try another route? | World News