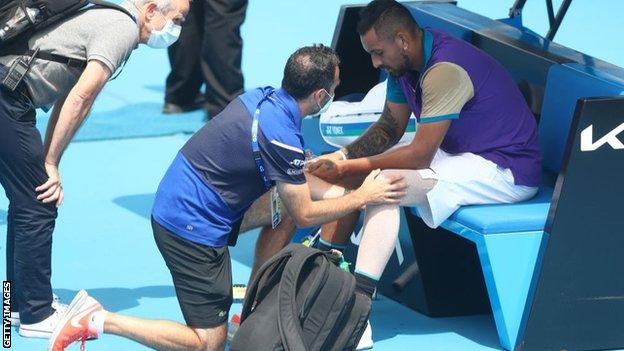 
British number one Dan Evans continued his preparation for the Australian Open by reaching the Murray River Open semi-finals with two victories on Friday.

Evans did not drop a set as he saw off Marcos Giron and Borna Coric, who had earlier overcome Nick Kyrgios.

Australian Kyrgios struggled with a knee injury during his 6-3 6-4 defeat and smashed his racquet in frustration before throwing it into the stands.

Kyrgios then said there is a “massive question mark” over him in Melbourne.

The 25-year-old was also handed a points penalty for unsportsmanlike conduct after using an expletive in an outburst.

“There’s a massive question mark for me, even if I was completely healthy, not playing in a year,” he said. “It’s not easy to just turn around and prepare for an event just like that. It’s not like a tap.

“I thought I did everything I could this week. I won a couple of matches, I had a lot of court time and practised every day.

“I think I’m ticking the boxes, I think I’m giving myself a chance. If I’m positive and motivated, I’m sure I’ll play some good tennis.”

Kyrgios, who missed most of 2020 because of the coronavirus pandemic, had already caused controversy on Wednesday when he stopped play for almost five minutes and called the umpires “peanuts” after being given a time violation.

Evans beat American Giron 6-4 7-6 (7-5) at Melbourne Park, with the Briton coming out strongly after play was suspended in the second set because of rain.

The 30-year-old returned later in the day to face Croatia’s Coric and took the first set 7-5 before winning the second 7-6 (7-1), serving 14 aces in total and winning 84% of his first-serve points.

He will play Jeremy Chardy of France in Saturday’s semi-finals, who recorded a walkover against Switzerland’s Stan Wawrinka.

Top seed Wawrinka had battled through against Australian Alex Bolt with a 6-4 4-6 7-6 (7-5) victory in two hours and 23 minutes, before withdrawing from the tournament. 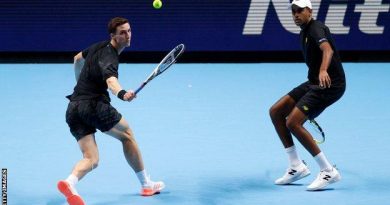 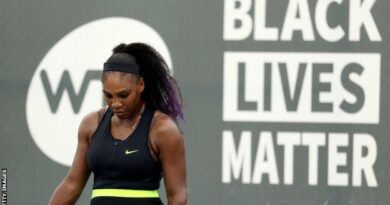