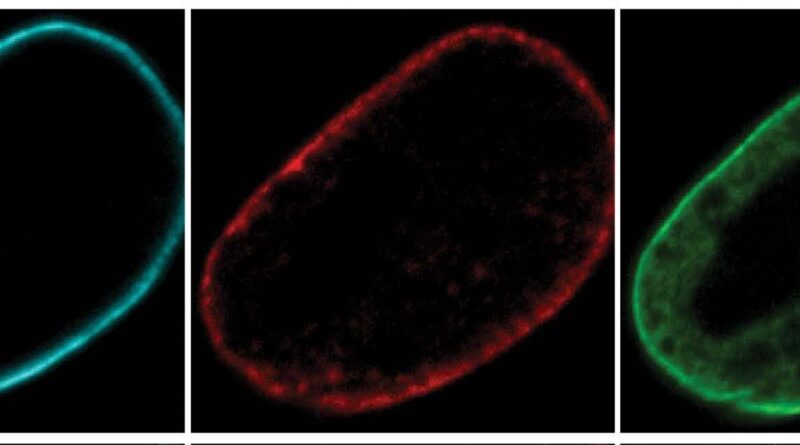 In a study with lab-grown mouse cells, Johns Hopkins Medicine researchers say they have found that a protein that helps form a structural network under the surface of the cell’s “command center”—its nucleus—is key to ensuring that DNA inside it remains orderly. The new experiments distinguish the role of the protein, called lamin C, revealing its usefulness in diagnostics and treatments for a variety of genetic disorders linked to DNA disorganization, such as the rapid aging disease known as progeria, muscular dystrophy and heart disorders related to mutations in these and related proteins.

“The impact of these findings could extend beyond the known laminopathic diseases, since it appears that lamin C is important for genome organization generally. We just don’t know at this point how lamin C is behaving in other diseases with dysregulation of the genome,” says Karen Reddy, Ph.D., assistant professor of biological chemistry at the Johns Hopkins University School of Medicine.

She continues, “many people are familiar with the idea that gene mutations—or errors in the genetic code— cause inherited diseases. However, genes that are highly disorganized could be as impactful as mutations in causing disease.”

Reddy notes that genetic tests generally do not consider the mechanics of how DNA is organized, which may be an important foundation to understanding genetic diseases.

Reddy and her research team published results of their study published Nov. 14 in Genome Biology.

Each human cell’s nucleus packs about 6 feet of tightly coiled DNA that holds the genetic instructions for every structure and function in the body. To keep the cell working, these threads of DNA must be organized into useable parts. The lamin proteins, which attach to the surface of the nucleus, do that by grabbing onto segments of the DNA, keeping them separate and tidy.

“Each compartment created by a lamin acts like a kitchen utensil drawer, keeping knives, forks and spoons easy to access, and more rarely used items like serving pieces out of the way until needed,” Reddy says.

In a bid to better understand how lamins influence how the cell uses and organizes its DNA, Reddy and her team used fluorescent dyes to follow three types of lamin proteins—A, B and C—through cell division, when DNA from one cell is duplicated then split between two offspring cells.

While lamin B has been easy to distinguish in previous studies, lamin A and lamin C have historically been treated as duplicate proteins because they are created from the same gene, says Reddy. However, there was growing evidence that A and C type lamins had distinct roles.

To sort them out, Reddy’s research team genetically engineered mouse embryonic cells to remove either the gene that creates lamin B or the gene that contains both lamins A and C. Then the researchers used microscopes to watch the lamins’ behaviors and whether the cells’ nuclear DNA remained organized as it divided.

The research team found that nuclear DNA in cells lacking lamin B looked nearly the same as normal cells dividing, implying that lamin B may not be essential to reorganizing DNA after cell division. However, nuclear DNA in cells lacking lamins A and C did not reorganize neatly, becoming tangled and unsorted from its normal compartments within the nucleus.

“It looked like there was a rowdy party in the normally well-organized kitchen,” says Reddy, of the cells lacking lamins A and C. “Things were not in their places and the strands of active and inactive DNA were intermingled and separated from the lamins at the edge of the nucleus.”

Next, the researchers used a series of specialized chemical reagents to disable either lamin A or lamin C in the mouse cells, enabling them to test each protein independently.

Reddy says a reason for this distinction was revealed in the behavior of lamin C in dividing cells. Her team found that while lamins A and B quickly bind to the surface of a newly forming nucleus and begin grabbing sections of DNA, lamin C remains dispersed throughout the nucleus and retains a special molecular tag called phosphorylation. The researchers believe this suggests that this modified lamin C helps guide DNA into place during reorganization. Once the DNA is organized, lamin C loses its molecular tag and becomes associated with the rest of the lamins at the edge of the nucleus.

“There is this exquisite choreography of the different lamin proteins and DNA to get things just as they should be,” says Reddy.

The findings suggest that new tests could be developed that distinguish between lamins A and C and should be considered when screening for some genetic diseases that involve lamin proteins or other proteins at the edge of the nucleus.

The gene that codes for lamins A and C are associated with inherited diseases that include three forms of muscular dystrophy: familial partial lipodystrophy, a condition that causes abnormal distribution of fatty tissue; progeria; and several heart muscle disorders.

The researchers note that these results bring up several new questions, including the role lamins have in organizing and regulating DNA during development. The team hopes to identify how lamin proteins and the genome behave when one specific type of lamin is mutated or disrupted, since there appears to be some cross-talk between the different forms of lamins. They also plan to investigate the cellular pathways that control the lamin proteins, particularly for lamin C, to further distinguish the importance of its role in controlling DNA.

Organizing a cell’s genetic material from the sidelines

Many People May Be Eating Their Way to Dementia 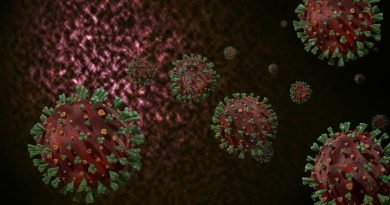