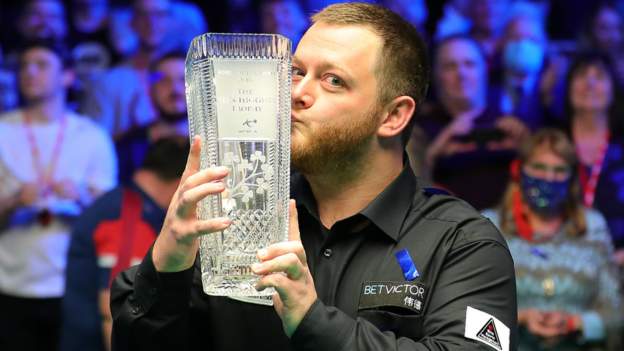 Mark Allen says problems he is facing away from the sport mean he is “unsure if he will get any of his prize money” for winning the Northern Ireland Open.

The Antrim player recovered from 8-6 down to beat John Higgins 9-8 in a thrilling final at the Waterfront Hall, collecting a first prize of £70,000.

Allen declared himself bankrupt in May and says he is unsure if he will be able to continue playing the sport.

“I’m hoping I can go on playing. It’s out of my hands,” explained Allen.

“I think the threat of possibly not being able to play going forward has made me appreciate the game a lot more.

‘Mentally in a good place’

Allen has spoken in the past about coping with mental health issues and of undergoing divorce proceedings from wife Kyla.

After losing to Mark Selby in the second round of the World Championship in April, the reigning Champion of Champions winner hinted at taking time away from the sport because of his personal off-table difficulties but has bounced back to clinch the sixth ranking event title of his career and move up from 11th to ninth in the world rankings.

“To win another tournament with all that is going on in the background shows where I am at mentally,” said the 35-year-old after his success in Belfast.

“Mentally I am in a good place with good people around me and winning this title is a memory I will cherish for the rest of my life.

“I think with everything that’s going on off the table for me, which I’ll not go into, I think it’s making me stronger as a person.

“There were a number of things that happened this week that in years gone by I would have let affect me and got beaten, but I’m just in a good place right now.”

‘Best atmosphere I’ve ever played in’

Allen twice led by two frames in Sunday’s final before Higgins battled back to level at 4-4 after the first session.

After sharing the next four frames, the four-time world champion took command by winning two in a row, but Allen surged back, winning the last three to seal an emotional win.

“It was the best atmosphere I have ever played in and comes second only to winning The Masters in terms of my career so far.

“The Masters is one of the biggest tournaments we play for – it’s one you’ll be judged on in your career when you finish.

“I’m a proud Northern Irishman and I get so much support here. It’s completely surreal. I dug deep at the right times and never gave up,

“Being from Northern Ireland, like Alex Higgins and Dennis Taylor, who both won world titles, I’m part of that history, and there’s no reason I can’t win a world title.”

‘I could hardly feel my legs’

“It was hard to focus and I had a great chance on the yellow and somebody decided that was the time they wanted to leave the arena. I had to gather myself and it’s not what I needed, I just wanted to get down and pot them.

“The roar, I’ve never heard anything like that in my life when the brown went in and had to steady myself to make the blue. Just to give that back to people of Northern Ireland after such a tough time. I’ve done my job as a Northern Irish snooker player.

“I’m a proud Northern Irishman and I get so much support here. It’s completely surreal. I dug deep at the right times and never gave up.”

‘I felt myself welling up’

The Northern Irishman, whose best previous performance in his home event was reaching the quarter-finals in 2016, capped a memorable week which included hitting a 147 in the first round before coming back from 3-0 down to stun three-time defending champion Judd Trump in the quarter-finals.

“I was trying to not get ahead of myself all week. I tried to play it down and it was only when I got the chance in the last frame that I realised what I was about to do. It was a weird feeling. It felt like ‘oh wow, all I can do now is fall apart’ and I didn’t really have that all week, I felt calm.

“The last few balls, the green and brown, I felt myself welling up and I’ve never had that on a snooker table in my entire life. I’m just glad I managed to pot a few balls before I did start crying.

“I don’t get down on myself the way I would when I was missing balls, I’m just trying to look forward to the next shot, the next frame, the next match. It’d be great if I can continue to play for a lot of years to come and I do believe I have the ability to bring a world title back to Northern Ireland.”

Edwin Poots: ‘Politics is a rough and tumble game’ 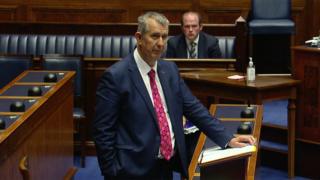