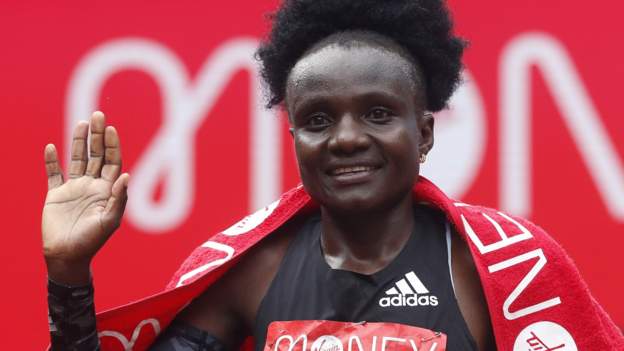 Jepkosgei, who won the 2019 New York Marathon, made the decisive move around 22 miles.

The 27-year-old won in two hours 17 minutes and 43 seconds, while a tired Kosgei dropped back and ended fourth.

Ethiopia’s Sisay Lemma landed the biggest win of his career in the men’s race, coming home in 2:04.01.

Fine, dry, cool conditions contributed to impressive times with Lemma becoming the sixth fastest man ever in the race, Jepkosgei leaping to seventh on the women’s all-time list and course records in both wheelchair races.

After 2020’s elite-only races, this year’s London Marathon welcomed back 40,000 mass-event runners to the traditional street course, while another 40,000 runners are completing the distance virtually, logging their distance via a tracking app.

Proud Purdue ‘all in for this day’

Charlotte Purdue, who controversially missed out on Tokyo 2020 selection, was the first Briton home in the women’s race.

Purdue finished 10th in a personal best 2:23.26, just short of Mara Yamauchi’s second place on the British all-time list but well inside the qualifying standard for next year’s World Championships in Oregon.

“I knew I did deserve a spot on the team but obviously I had to put it behind me so it was good to have this as a focus. I was all in for this day,” she told BBC Sport.

“Qualifying for the World Championships was a great bonus today as well.”

Kosgei, competing just 57 days after claiming Olympic silver in Tokyo, was aiming to follow in the footsteps of Germany’s Katrin Dorre and become only the second woman to win three back-to-back women’s titles.

It was also an underwhelming outing for the men’s defending champion Shura Kitata with the Ethiopian, hampered by a hamstring niggle, finishing sixth in 2:07.51.

He finished a little over five minutes ahead of Britain’s Philip Sesemann as the former middle-distance specialist made an impressive marathon debut at 29.

Lemma, who finished third on last year’s Covid-enforced closed course, turned up the pace at a similar point on the route to Jepkosgei with similarly successful result.

Kenya’s Vincent Kipchumba and Ethiopia’s Mosinet Geremew were second and third in his wake. 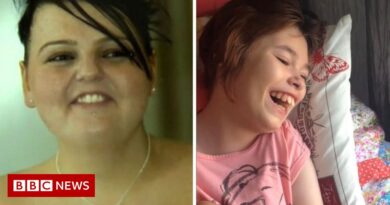 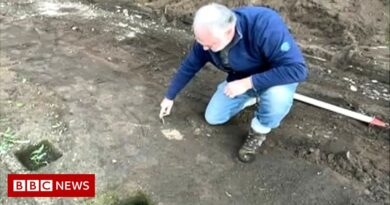