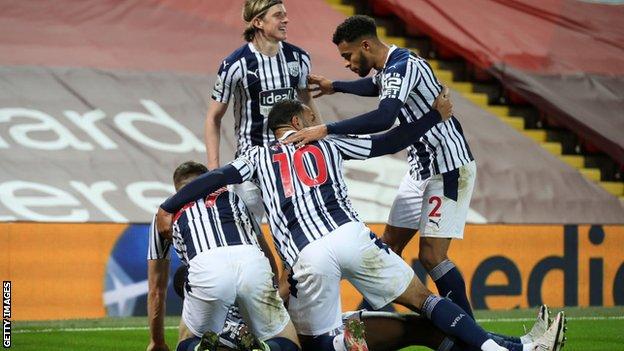 
“It’s like when England play San Marino” one BBC Sport reader wrote. Another vowed they would take “Bielsa-ball” over Big Sam’s West Brom “any day” and another claimed the Baggies would end up “in the River Mersey if they drop any deeper”.

And after 45 minutes of watching West Brom struggling against champions Liverpool at Anfield it was perhaps easy to understand why those comments were being made.

Sam Allardyce’s West Brom had just 18% possession in the first half. Liverpool midfielder Jordan Henderson completed almost twice as many passes as the entire West Brom team put together. They were a goal down after 12 minutes and Liverpool had 10 shots in total – although only one was on target.

But 45 minutes later, ‘Big Sam’ had done it again, masterminding a 1-1 draw at Anfield, defying the odds and silencing the internet – 2020 style.

“People will say we are lucky but that was good application from the players and they took their opportunity at the other end,” said Allardyce, who is unbeaten in each of his last four Premier League games at Anfield as the coach of four different clubs.

“I have been here two minutes and this is my second game so this result almost feels like a win.”

‘The biggest fluke in the world…’

Liverpool manager Jurgen Klopp said “nobody would expect a team to play like West Brom in the first half”.

“It was like a 6-4-0 formation or whatever it was,” he added. “It is an incredible challenge when you constantly face 10 men. To be fair, West Brom did their job inside 90 minutes.

“West Brom deserved the point because we didn’t finish the game. It is our fault and that is why it is only one point instead of three.”

A game of two halves

Henderson completed 85 passes for Liverpool in the first half, almost twice as many as West Brom managed as a team (46) – the joint-second fewest by a team in a Premier League game this season.

Speaking at half-time, former Chelsea and Scotland winger Pat Nevin told BBC Radio 5 Live it was “one of the most one-sided matches I have watched in many, many years”.

“I’ve watched West Brom since the start of the season and player-for-player they are going down,” he added at the break. “Allardyce has spotted that and said ‘can I find a way of surviving?’

“I don’t blame him for doing it, but it is horrible to watch and even more horrible to play in, when a manager does not believe in you as a group.

“He wants to get this one out of the way and if he gets a draw it will be the biggest fluke in the world.”

‘Big Sam’ must have been listening because he moved Karlan Grant higher up the pitch in the second half and West Brom had 27% possession.

Grant had a one-on-one with Liverpool goalkeeper Alisson before Semi Ajayi netted the equaliser in the 82nd minute as the Baggies recorded three shots on target, one more than the Reds.

“There is a lot of defending you have to do against a quality team with a fantastic home record,” Allardyce said afterwards. “To the man, we frustrated Liverpool as much as we could. We had to take the sting out of them in the first half.

“Liverpool always take the game to you. I didn’t see Sam [Johnstone] in goal under enormous pressure so that shows how well we contained pressure.”

By the end, even Nevin had changed his mind.

“In the second half, Allardyce said ‘we can go for this’. If they had been too open in the first half they could’ve been a few goals down.

“It was a 6-4-0 formation in the first half and it looked completely ridiculous. In the second half they changed it with one man up front and they kind of deserved it with the way they then played.”