Peterborough United have been “cheated” out of a chance to gain promotion to the Championship according to director of football Barry Fry.

Posh were replaced in the play-offs by Wycombe on a points-per-game basis after League One season was curtailed on Tuesday.

“I’ve been in the game 60 years and its the biggest disappointment I’ve ever had,” Fry told BBC Look East.

“I feel my club has been cheated for the chance of promotion.”

Peterborough – who had taken 22 points from their last nine games – finished seventh after the table was rejigged. Wycombe, who had a game in hand on Posh, climbed from eighth to third.

“Your form at home, your form away, they took nothing into consideration, I think it’s been a disgrace the way its been handled form day one,” 75-year-old Fry added.

“The governing bodies have let the football family down, I’m so annoyed.”

Peterborough owner Darragh MacAnthony said there had been an injustice and pledged “vengeance” next season, but Wycombe chairman Rob Couhig told BBC Three Counties Radio he believed the right decision had been made.

“I have to admit some disappointment and I know Gareth and the players feel like if they been allowed to play out the season they could have contended for that automatic promotion,” Couhig said.

“But I think the league did the right thing by all the teams recognising the safety factors, recognising the financial implications, looking at the sporting integrity components and came out with the responsible decision.

“The fact that the votes were overwhelmingly in support of the EFL’s proposal I think indicates that it had great support throughout the league.”

‘We could have played’

Meanwhile Ipswich owner Marcus Evans believes they could have finished the League One season safely on the pitch rather than ending the campaign early.

Eighteen third-tier clubs voted to curtail the season immediately on Tuesday amid the coronavirus pandemic.

Ipswich, who were relegated from the Championship last year, finished 11th on a points-per-game basis.

“It has always been our desire to see the League One season finished on the pitch,” he said.

“Personally I think there were other safe alternatives to the way things have worked out, certainly with so many clubs in with a chance of finishing in the play-off places if the season had continued.

“A decision had to be made though and while we don’t agree with the outcome, we do fully understand that the cost of finishing the season for many clubs was prohibitive.”

While clubs near the play-off places and relegation zone have been vocal in their desire to continue the campaign, the financial implications of playing games in front of empty stadiums and taking players and staff off furlough were huge for many.

It was estimated it would cost each side around £500,000 to end the season.

Accrington chairman Andy Holt – whose side were 17th and eight points above the relegation zone – said he could now concentrate on next season and securing the future of the club and playing squad.

“The uncertainly was affecting everyone but now the decision has been made, we can look forward in terms of player contracts,” he told the club website.

“We needed the certainty so now we can start to rebuild the club for next season.

Sunderland are now preparing to spend a third successive campaign in League One after finishing ninth.

The Black Cats were relegated from the Premier League three years ago and dropped out of the Championship a season later before losing last season’s League One play-off final.

The club’s Premier League parachute payments end this summer, but newly-appointed chief executive Jim Rodwell – who wanted to keep the season going – does not think it will affect their hopes of going up in 2020-21.

“There are going to be lots of out of work footballers this summer, that is a consequence of the virus, but also the fact that we have not decided to play out this season makes their plight even more difficult,” he told BBC Sport.

“Our focus now is on building the best squad of players we can to take on League One next season.

“I think our wage bill will certainly be one of the biggest in the league, a lot will be dependent on who comes down from the Championship because that team tends to come down with quite a healthy budget.

While there have been some very vocal losers, sides have also gained from the decision to curtail things.

Rotherham return to the Championship after just one season away.

“It’s been a fidgety day, it’s been an anxious day. It’s been a day where you think all things can go wrong.

“For weeks now League One clubs have been talking to each other, so you had a strong idea as to the way votes probably would go, but until it’s rubber-stamped, there’s still that worry and concern and anxiety.”

And Stewart has high hopes that Rotherham can re-establish themselves in the second tier.

“It was a long time coming, but I’m really pleased that democratically the clubs in League One have voted for the outcome and that outcome means that Rotherham are going to have another season in the Championship. That’ll be five times in the Championship in six seasons,” he added.

“We’re up for the fight and I can say to the fans that we have invested, we will invest and we’ll try and work hard to get a foothold in that Championship.” 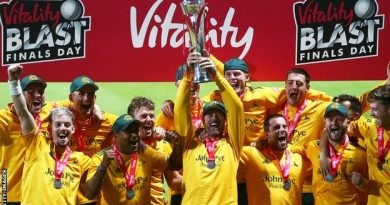