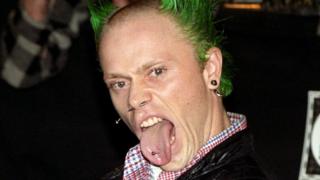 Tributes have been paid to The Prodigy singer Keith Flint a year after his death.

His bandmates Liam Howlett and Maxim tweeted: “One year has gone by since you left us, we miss you everyday man, your light blazes strong.”

Flint was found hanging at his home near Dunmow, Essex, by a friend on 4 March last year.

The singer rose to fame with the electronic band in the 1990s and sang on the hits Firestarter and Breathe.

Plans for a statue in Flint’s home town of Braintree have been backed.

Thousands of music lovers lined the streets along the route of Flint’s funeral procession to “raise the roof” in tribute to the singer.

A coroner heard Flint died due to hanging but recorded an open conclusion, deciding there was not enough evidence to say he had intended to take his own life.

Fans have also paid tribute to the singer a year on from his death.

One wrote: “One year ago today we lost Keith Flint. His presence on stage was like no other.

Another said: “One year ago today. I shall be blasting The Prodigy this morning, and remembering.”

The Prodigy released their latest album No Tourists in November 2018, their seventh consecutive number one record. 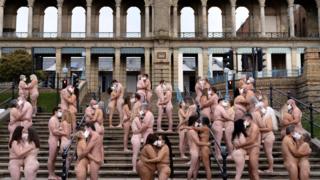