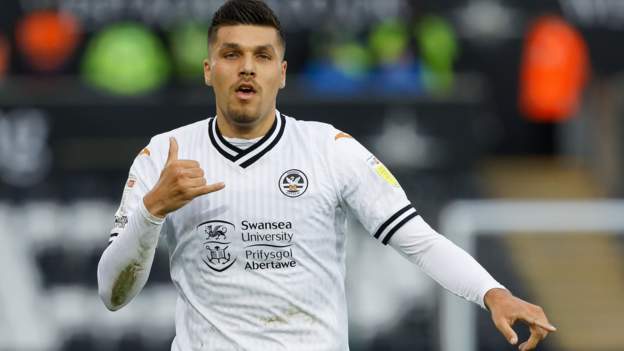 Striker Joel Piroe has gone “above and beyond” expectations at Swansea City, according to head coach Russell Martin.

Both arrived at the club in the summer and Martin says the Dutchman has “relished” life in the Championship.

Piroe, 22, has scored 11 goals in 19 appearances since joining from PSV Eindhoven.

“When we came in and looked at the squad those first two weeks, I would have to say he has exceeded our expectations since then,” said Martin

“He has gone above and beyond in terms of how I thought he would impact the team.

“He has been incredible and that is on him, he is such a brilliant guy, a brilliant character and he just wants to learn.

“He is a young guy who is really comfortable with himself in terms of his day-to-day actions and his behaviour, even down to the clothes he wears.

“We love Joel, he is a confident and self-assured boy, but he is humble and he wants to learn.

“He is just himself, he might take a bit of stick from the guys sometimes but he doesn’t care, he just gets on with things and it’s not that common to have a group that can express themselves, do what they want without being mocked, they are all accepting of everyone and that makes it an easy dressing room to come in and work with.

“They are an open and honest group who have put their egos to one side, which is rare in football, and we are lucky to be working with a group like that.”

Piroe began his run of goals in August during the EFL Cup win at Reading, the team Swansea play next in the Championship.

Martin believes that August cup tie was the catalyst for the Dutchman: “He has got no fear, he came in with no real idea of what the Championship is like, and when it hits you the options are to sink a little bit or you can relish the opportunity and the challenge. He has relished it.

“You can see his team-mates really trust him and enjoy playing with him, especially Jamie Paterson who he had another assist for the other night.

“Joel just has to keep working and keep improving, I think he will. He is angry after every game if he has not scored or affected it but we love having him here.

“It was a big night for him at Reading in August, we felt it was starting to take shape and Joel was a part of that.”

Covid: ‘We need to reduce virus spread before Christmas’ – FM 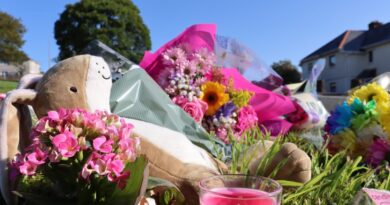