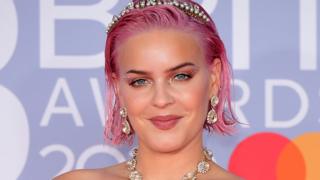 ITV has apologised “for any offence caused” during a performance by Anne-Marie at the end of Ant and Dec’s Saturday Night Takeaway.

The flag is seen by some as a symbol of Japan’s imperialist past.

Anne-Marie also apologised for the “hurt” it had caused but said she had “nothing to do” with costumes.

ITV said it has “taken steps to re-edit” parts of Saturday’s episode for its catch-up service ITV Hub, and for future broadcasts.

The channel said any offence “was clearly unintended”.

South Korea wants the flag to be banned at the Tokyo 2020 Olympic games.

Some politicians there have compared it to the Nazi swastika.

What is the rising sun flag?

Japan’s national flag is a red disc on a white background.

The rising sun flag has a similar red disc but with 16 red rays coming from it. Both flags have been used for a long time, dating back centuries.

During the 19th Century, the rising sun symbol became the flag of the military and it was flying during Japan’s imperialist expansion when it occupied Korea and part of China.

During World War Two, it became the flag of the navy – and that’s largely where it got its controversial reputation. Japanese troops occupied much of Asia during the war, carrying out atrocities against local people.

Despite that the flag has been widely used as a national symbol in Japan and commonly appears on products, in adverts, and in popular culture.

Today, it’s still the flag of the country’s navy and a slightly different version is used for the regular military.

Coronavirus: Mulan and The Morning Show among delayed projects