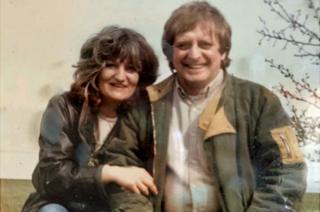 Actor Peter Gordon put a love poem under his wife Alison’s pillow every day for 25 years. He has kept writing for her since her death, and his family have now put his poems online.

Peter Gordon has raised the bar for romantic gestures.

While most men think doing more than buying a bunch of flowers once in a while is going the extra mile, he penned 8,500 poems over several decades about the life and love he shared with Alison.

It’s hard to think of a gesture that could be both as grand and as sweetly personal.

The poems form a remarkable chronicle of domestic devotion, passion and bliss. If Peter’s not the most romantic bloke alive, they suggest he’s been one of the luckiest.

Peter started writing the poems in the 1980s, but they became a daily fixture in 1990, and remained so until her death from lung cancer in 2016.

“She was very touched and used to look forward to it,” he recalls.

“It started off as little notes and then little poems. I would put them under her pillow, she would come to bed, look under the pillow, give it to me, and I would read it to her.

“Then I’d give it to her and she would read it silently and then fold it up and put it back under the pillow.”

Around 340 of his vast archive of poems have now been put online by their daughters Cassie, a charity content creator, and Anna, a writer who has worked on Succession and Killing Eve.

Some of the poems are recited in accompanying videos by actors like Julie Hesmondhalgh and Pearl Mackie.

Some are simplistic and light-hearted: “This universal love is Pete’s / I love her more than fruity sweets.”

Others go deeper: “Our love’s no steady / Stream of light, but brilliant sparks / Flying off endlessly in the gloom / And glorious.”

Together, they act as a biography in verse, including recollections about the moment Peter was hit by Cupid’s arrow while appearing in a play with Alison in Edinburgh in 1973 (“Still the arrows rain each day / Looks like Cupid’s here to stay!”)

“She was lovely,” he now remembers. “She was quite forthright in her opinions, which I always admired.

“She was an actor like me, so that attracted me – a very good actor. She was just kind, assured in a sense, but we were both a little lost when we met.”

As the family grew, the poems conveyed the contentment of being together in their “wild, tangled” home in Brentford, west London, “secure against the world and weather”.

He trained at Rada and performed at the National Theatre and the Royal Shakespeare Company, and has TV and film credits including Oranges Are Not the Only Fruit and Bridget Jones: Edge of Reason.

Alison appeared in early 1970s sitcom The Lovers among other shows, and went on to be a successful director and drama teacher.

Peter’s writing describes the emptiness of being separated when one of them was away with work – and the excitement of speeding home to Alison on the 391 bus: “Through star – and streetlight – I must kiss or die!”

But it also reflects his constant struggle to make ends meet as a jobbing actor. “I was obsessed with earning enough money to keep the family going and the home going,” he says.

In his poems, he decides there’s more to life, however: “Love, for which God I thank / Is the source of true content, the currency, the means / To restore the balance: it’s money in the bank.”

It’s not simply a plain-sailing love story – like everyone, Peter and Alison had their ups and downs (“The Earth’s not flat / Neither is life”).

But the arguments were never serious, he says, and writing poems even on bad days took the “sting” out of the quarrels.

Peter seemingly even found Alison’s snoring “graceful”. Snoring comes up more than once – daughter Cassie, who has typed up the poems, has a favourite line: “Roar away my feisty snorer.”

“There are a lot about mum’s feet and hair,” says Cassie.

“And eyes,” Peter adds. “They were perfect.”

As does her bottom. “I dwell upon it constantly / Two rounded hillocks of real class.”

In 2015, the poems took a more reflective and darker turn after Alison was diagnosed with cancer. When she died, he continued writing, although not daily.

In those poems, the emptiness is excruciating. One, in which he imagines a walk with her, sums up both the joy of their life and the pain of her absence:

“She hangs on my arm or we go hand in hand / And we chat – well, she’s sending me up half the time / Or we’re making up songs and trying to rhyme / And laughing sometimes when the words haven’t scanned.”

He’s only brought back to reality when her voice tells him: “Even the fondest, it can’t be denied / May forget now and then – it’s a year since I died.”

After her death, Peter sorted through the poems in the shed of the house he now shares with Cassie, and picked out the best to go online.

He says: “I’ve been reading through them again, for what we’re doing, and I find some of them make me cry, or nearly cry.

“Some make me laugh. There’s always a lot of humour.”

The poems were published for the first time on the website, A Love In Verse, on the fourth anniversary of Alison’s death last week.

“I want to honour the love that we had, and I think it’s worth letting people know about it,” Peter says. “I think it’s a good thing, especially in these difficult times.

“When we came up with this whole idea, it was quite long ago, long before the lock-in. I just thought they were quite good and I would like them as a memorial to Alison.”

About the centre of the small loo window

Leaves of every ivy-colour frame

The bold obtrusion of an autumn sun

Leaf-jewels form along the vines

There’s no compounding of these opposites

Each surface either red or green or bearing

Each separate – but look closer now and behold!

Some leaves blend red and green in a strange shade

Subtle and lovely! Well, you planted them

The ivy plants that now are everywhere

Blending opposing colours as your love

Within my life spreads vine and leaf

And colours sweet and sharp and dark and light

Making my days be filled with such a glory

With which November sun catches a seagull

As it wheels over roofs, against the sky.

Viagogo may have to sell all or part of StubHub, regulator says