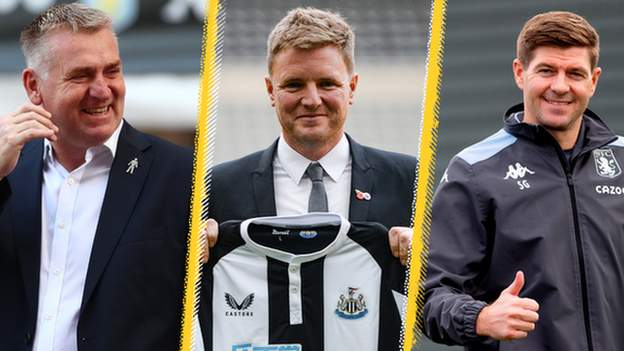 The Premier League is back this weekend – and for three clubs, it is also the start of a new era after changing managers during the international break.

After three games in interim charge of Newcastle, Graeme Jones has made way for Eddie Howe, who becomes Steve Bruce’s permanent successor. Aston Villa lured Steven Gerrard from Rangers after sacking Dean Smith, who then made an instant return to management with Norwich after the Canaries dismissed Daniel Farke.

All three managers start their new tenures with a home game and not only that, they all kick-off at 15:00 GMT on a Saturday. How novel.

They moved quickly to find his replacement, with Gerrard moving from Rangers on a three-and-a-half year deal just four days later.

Gerrard has a burgeoning reputation as a manager thanks to the impressive work he has done at Ibrox since his appointment in 2018.

After finishing runners-up in his first two seasons in charge, Gerrard led Rangers to their first Scottish title for a decade in 2020-21, ending Celtic’s hopes of securing a 10th in a row.

Gerrard proved he had an eye for a bargain, with Joe Aribo, Steven Davis and Allan McGregor arriving on free transfers, while just £50,000 was required to land Glen Kamara from Dundee. Gerrard also raided his former club Liverpool for winger Ryan Kent, while Connor Goldson and Borna Barisic have justified their transfer fees.

Not all of his signings were a success. Andy King and Sheyi Ojo struggled to make an impact while on loan at Ibrox and Jake Hastie has yet to make a league appearance since joining from Motherwell.

Ex-Aston Villa and Wales defender James Collins: “I think it’s a great move for both parties and one Steven is going to be hugely excited about. Aston Villa are going to get a young manager who is majorly ambitious.”

Former West Ham and England defender Matthew Upson: “He has quite a steely presence and can sometimes be a man of few words, but his words are quite meaningful. He’s done a great job at Rangers. He has probably learned a lot from that experience and this is a natural step.”

Ex-Scotland forward James McFadden: “It’s good for both parties. Steven has done a fantastic job at Rangers. When you come up from England to the Scottish game, you are always looking for that opportunity to go back to the Premier League. It’s worked out well for Steven and the opportunity has come up, so I’m not surprised in the slightest he has taken it. “

Bottom-of-the-table Norwich sacked boss Daniel Farke on 6 November, hours after he guided them to their first Premier League win of the season against Brentford.

Former Chelsea manager Frank Lampard held talks with the Canaries, but pulled out of the running. That left Smith in the clear to return to Premier League management, eight days after he was sacked by Aston Villa.

Aston Villa were 14th in the Championship when Smith was appointed manager in October 2018. In his three years in charge, he guided them to promotion from the Championship and reached the Carabao Cup final, and secured an 11th-place finish in the Premier League last season.

Prior to that, he secured three top-10 finishes in the Championship with Brentford, having begun his managerial career at Walsall.

After captain Jack Grealish was sold to Manchester City for £100m, Smith reinvested the money in club record signing Emiliano Buendia from Norwich City, as well as Danny Ings from Southampton and Leon Bailey from Bayer Leverkusen.

Injuries to Ings and Bailey have hampered their progress, while Buendia has yet to find his best form – though Smith was not afforded the time to see whether they will work out in the long term.

Former Norwich striker Chris Sutton: “I think from Norwich’s point of view, they have the best possible chance of staying up by appointing Dean Smith.

“If Norwich do go down, they have a guy with experience of getting Villa back into the Premier League. I think it’s Norwich’s gain.

“Norwich do have a good chance of staying up, I think he was brought in at the right time. It’s a big deal for Norwich to attract Dean Smith, and he must have seen something in that club as he won’t want a relegation on his CV.”

Former Scotland midfielder Don Hutchison: “I think he and assistant Craig Shakespeare can provide Norwich fans with a bit of hope. I think they’ll go down but I think they’re the best two guys to bring them back up.”

Former England captain Terry Butcher: “He is joining a very good club, a great set-up and a great place to live. I would ask questions not of Dean Smith and the Norwich board but the players. They have to respond because if they don’t, they will be relegated in record time.”

Steve Bruce left Newcastle on 20 October, 13 days after the Saudi Arabia-backed £305m takeover of the club was completed.

The club made Villarreal boss Unai Emery their first choice to succeed Bruce, but he turned down their approach. The Magpies instead turned to Howe, who returns to management for the first time since leaving Bournemouth in August 2020 following relegation.

Howe took Bournemouth from the bottom of League Two to the Premier League, either side of a short spell at Burnley.

He kept the south coast club there for five seasons, finishing 16th, ninth, 12th and 14th before relegation at the end of the 2019-20 campaign.

A number of players signed when Bournemouth were in the lower divisions flourished when they entered the top flight, including Josh King, Callum Wilson, Ryan Fraser and Matt Ritchie – with Wilson, Fraser and Ritchie now reunited with Howe at Newcastle.

However, some of Howe’s other big-money signings struggled to justify their hefty transfer fees, including the combined £34m to sign Dominic Solanke and Jordon Ibe from Liverpool.

Former Norwich and Chelsea striker Chris Sutton: “He clearly wasn’t first choice. I don’t think Newcastle have handled things well with the leaked proposal for Unai Emery. They had to get someone in. I like Eddie Howe, I think he’s a smart guy, but he’s got one hell of a job on. He’s got to get his recruitment right in January and it’s about staying up.”

Former Manchester City and England defender Micah Richards: “I think Eddie Howe will be good. We worked with him on Match of the Day 2 and I love his ideas and enthusiasm. He does play exciting football but it will take a bit of time. Emery was a blow but in terms of where Howe got Bournemouth, coming to Newcastle after being out the game when you can rethink your strategy – it’s a big job but I think he can do well.”

World Cup 2022: Four games a day to be played in group stage in Qatar