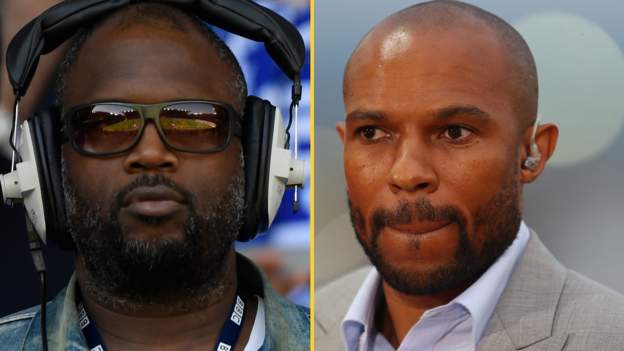 After back-to-back heavy defeats in the Championship, Cardiff City fans have expressed their unhappiness at manager Mick McCarthy with boos at the stadium and comments online.

Former Bluebirds Nathan Blake and Danny Gabbidon have also had their say as Cardiff lie 10th in the table with three wins, two draws and five league losses so far in 2021-22.

Blake believes issues beyond tactics, selection and playing standards that need to be considered.

Gabbidon points to a lack of “fight” among the players, who he says also neglected the game’s basics in Tuesday’s 4-0 home defeat by West Bromwich Albion that followed their 5-1 hammering at Blackburn Rovers.

Here is what they told BBC Radio Wales:

“There’s been a plethora of problems over the last two or three seasons and the decision-making at the top has been pretty woeful.

“I’ve said for many a year Cardiff have no philosophy, so when you’re in a situation where you keep changing managers and the type of football that’s been brought in, you’re always going to set yourself up for a fall.

“I did think it was a bit harsh [booing by fans aimed at McCarthy] but they work every day, they follow the team all over the place and they’re more than entitled to their opinion.

“If you look at last night, basically Cardiff played with eight defenders and two attackers, James Collins and Ryan Giles.

“You can’t win games in the Championship with Giles and Collins.

“So they’ve got major problems, for me.

“And it’s not just on the pitch and I’ve said it for many a year, it’s throughout the club.”

With Cardiff hosting Reading on Saturday, Blake fears for what is in store for Cardiff’s players and believes the club’s owners and powerbrokers have issues to address:

“You don’t want to play at home when your confidence is knocked the way it is for Cardiff at the moment.

“They’ve got themselves in a really serious situation, because there’s little or no investment coming in from the top.

“Because they have no philosophy they’ve allowed manager after manager to bring in players that – listen, they are footballers – but they are not going to get you to the top of the Championship.

“You had teams like Barnsley up at the top last season; okay, they’re struggling this season.

“But there’s more and more teams playing football now and taking nothing away from the manager, he’s had two promotions out of this division, but that was a long time ago.

“So you have to look at the type of players you’re signing, but if you don’t have the people who understand the game in charge, then if you’re [owner] Vincent Tan it’s going to continue to cost you money.

“I heard [BBC Wales football correspondent] Rob Phillips say to [ex-Bluebird on the Call Rob show] Jason Perry on the weekend, ‘oh, you know he’s putting £3m a month in’. He’s having to do that because they’re not in the Premier League.

“I feel sorry for the man [Tan], but at the end of the day the buck stops with him. You can’t keep going around in this circle expecting there to be success.

“What do they say? ‘Only a fool does the same thing and expects a different result’?”

As for McCarthy’s future, Blake had this to say:

“He’s the type of manager who will stay and will fight. I look at the team and think ‘what’s happened to all that pressing?’.

“After Mick came in last season, they some great results and got themselves in contention.

“What’s happened to that pressing? There’s none of that. Defensive shape is all over the place.

“Yes, Mick is the type who will fight and fight to the bitter end, but I don’t understand why he seems to have gone away from playing more football and a pressing game to now, where there’s little or nothing of nothing.

“You’re just reliant upon Giles to put the ball in for [Wales striker] Kieffer Moore – you have to play Kieffer Moore weekly. You have to let himself play himself into form.

“But do I think Mick will go? That’s kind of been the process at the club, hasn’t it? It’s all on the manager so it’s his fault.

“There’s no responsibility, accountability taken within the board, within the transfer committee or within the ownership, so probably yes [he’ll stay].”

“There’s no intensity, there’s no desire and I don’t know why that is. Are they not happy with the manager? I don’t know.

“But we can talk about the style of play and all that stuff – okay, we want to see better football.

“At times it was like a hot potato when West Brom pressed, Cardiff City were found wanting, they didn’t really know what to do in possession, turned the ball over too often.

“But you can still do the basics of the game, you know, defend correctly, show some heart, play for your team-mates, throw yourself into tackles, block shots – all these things.

“It’s the basics that Cardiff were doing quite well last season under Mick and that’s why they were getting results.

“And they had someone up front in Kieffer Moore who was sticking the ball in the back of the net.

“I’m not seeing any fight from this Cardiff City team – that’s what’s alarming – and when you get to that stage as a manager you are under pressure.

“Mick’ll know he’s under pressure now. The last three or four performances have been nowhere near good enough and he will know that the buck stops with him now.”

“There’s a lot of issues going on with this Cardiff City team and it’s all seemed to have come in the last four or five games really, because I thought the start of the season wasn’t too bad.

“I wouldn’t say they were playing brilliantly, but they got a few results at the start of the season, a good comeback against Nottingham Forest so you’re thinking, ‘okay the fight and the spirit, all those things are still there”.

“He’s [McCarthy] going to have to use all his experience now and find out what the problem is with these players otherwise he’s going to be gone. It’s as simple as that.

“But I still think these players can play a lot better.”

Fan Barry Murphy from Pontypridd, a season-ticket holder for 22 years:

“For me the whole footballing philosophy needs to change. For the last eight-nine years we’ve been watching long, direct football.

“But since McCarthy’s come in… there’s no spark and no flair.

“It’s all well and good giving these kids a chance – and I love seeing the academy boys come through.

“But they’re being taught way in the academy and the Under-23s but they get a chance in the first team and they’re playing long, direct, dinosaur football.

“It’s no good for their progression and it’s no fun for us to watch either.

“The whole club needs to change from top to bottom. The people appointing these managers are going for the safe, uninspiring choice which means the same direct football.

“Unless they change the philosophy of how they want to play football, the football will never change.

“The whole things needs to be ripped up and start again and if that means a season of consolidation then so be it – let’s build for the future.”

“It’s horrible to watch and it’s no fun and I can understand why people are saying that when they watch it on TV they feel empty. Leaving the stadium I felt similar to be honest.

“I think most City fans when McCarthy got the long-term contract a few months ago could see this coming a mile off.

“We all knew ‘ok, he’s going to do well, but this is only going to end one way’ and to be honest I’m surprised it’s happened so quickly. But we all knew it was coming.

“We knew what we were going to get with McCarthy and it’s not like we’re surprised by how his football’s been.

“This solely lands with the board and their short-term visions and uninspiring picks.

“They’ve got to start thinking long term – it’s been so short term every time and other than Warnock it’s not really worked.

“[Neil] Harris they gave a go to then things didn’t work out so they made the change and they went back to the safe, cheap option with no real foresight.

“What we’re disappointed by as much as anything is the lack of long-term vision by the board.”