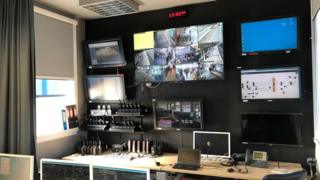 At the top of a narrow staircase behind a door marked “private” on platform three, is the Cardiff Central railway station control room.

This is where Transport For Wales (TfW) staff keep an eye on everything that is going on in and around the station.

At the far end of the office a wall of screens shows what is happening on the lines and on the platforms below.

There is nothing on any real note going on, other than the usual flow of passengers.

But come Saturday the scene will be very different as up to 35,000 fans flow through the station ahead of Wales’ Six Nations match against Scotland.

And this room is where rail operators and transport police will coordinate the “massive undertaking”.

“All of our trains will be out in service,” said TfW’s director of customer delivery Bethan Jelfs. “We’re very experienced at running the operation.”

Some 70 extra railway volunteers and 120 crowd management staff will be brought in to help.

“We’re constantly refining it and adding to it and trying to help customers navigate the system more,” Ms Jelfs added.

“It’s getting more and more popular for people to use rail to come to events in Cardiff so we do have to constantly keep adapting our event plans to keep up with customer expectations.”

Those expectations were not met in 2015 when rail operators were criticised for the “unacceptable” experience faced by thousands of fans outside Cardiff Central during the 2015 Rugby World Cup.

Passengers waited for up to four hours for a train following the first two games at the Millennium Stadium – as it was called then.

TfW, which only took over operations in 2018, said lessons have been learned.

Nevertheless, come Saturday evening there will be lines of people outside the station waiting to board their train home.

“We understand customers’ frustrations because people have an expectation to arrive at the station and the train be ready for them.

“When we’re dealing with 35,000 people, we have to be able to stagger the load into the station.

“It’s just simply not built to accommodate that amount of people.”

Ms Jelfs said information is provided to fans as they wait in line.

“We’re just trying to reassure customers, keep them moving and by and large they don’t stay in that area for very long before we get them into the station.”

Having already had to contend with “numerous flooding incidents” over the past few weeks, coronavirus presents a fresh challenge this weekend.

“Given that the decision was made for the game to go ahead we had to plan accordingly for that to get as many people moving safely,” she said.

“We’re taking advice from the public health authorities and taking the guidance from there.”

TFW said extra cleaning is taking place on trains and in stations to help protect passengers.

Meanwhile the advice for rugby fans is to plan ahead and allow time for their journey. 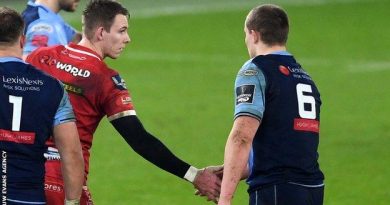 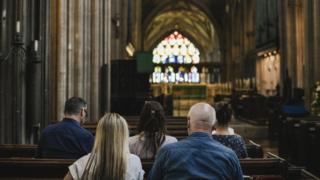 Coronavirus: Calls for places of worship to reopen in Wales